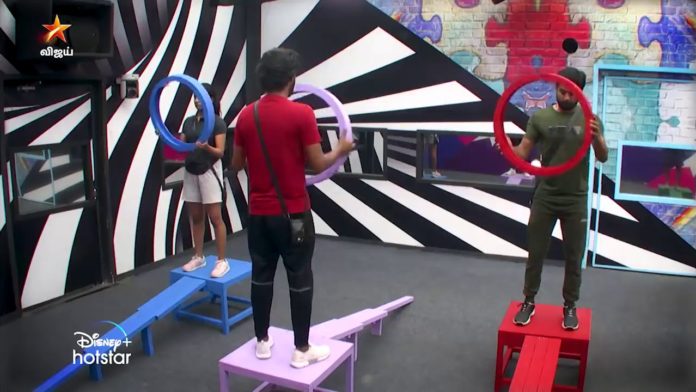 Ramya is leading the table with 20 points in the last two days of the four-round tournament as the ticket to finale task is currently underway at the Bigg Boss house. Shivani and Rio are next with 19 points each.

At this point today the scenes of the Fifth Round Task taking place are shown in the first promo video. The task is to spin the ball in the ring without falling down. As usual Aari gets out first as all the contestants are engaged in the task. Ramya and Shivani gets out after him.

Gabriella in the fourth and Somsekar out in the fifth, Rio and Balaji playing offensively. Balaji was out for the sixth time and Rio topped the round with seven points. He already has 19 points and is currently in first place with 26 points.

Balaji or Ramya is likely to be in second place. Rio will be declared eligible for the finals directly if the task is completed with these five rounds. Let’s wait and see in the coming promo videos if there are any more rounds.