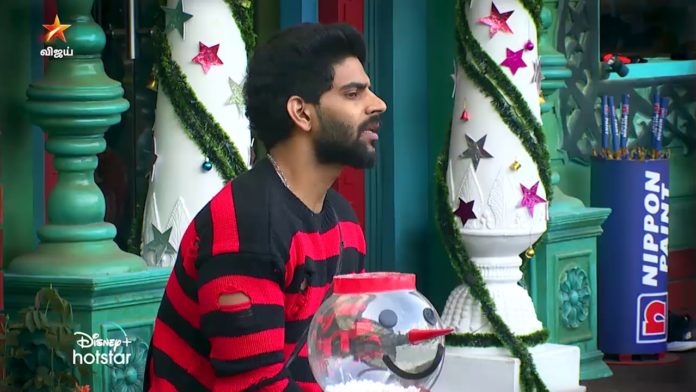 Aari was nominated week as he faces a lot of opposition inside the Bigg Boss house. Aari and Som were selected as the best performers in this week’s Ball Catch task.

Rio also qualified directly for the captain selection task as he scored highest points among the contestants in the Ball and Catch task.

In this context, the task of selecting the next week’s captain of the Bigg Boss House took place today. Rio, Som and Aari took part in the task. Put the spoon in the mouth and put the thermocol balls in it and hold it in the mouth and pour it into the bowl on the head of the snowman.

The three start to do great speed since the first one to complete is the winner. There were various problems including the thermocol flying in the air and having to walk exactly on the line.

Ari is finally declared the winner after completing this task first. So he becomes the captain next week. So it is noteworthy that no one can nominate him for next week’s eviction.

Archana won the captaincy task last week, but since she has been eliminated, it is noteworthy that she made Balaji as the captain of the house.