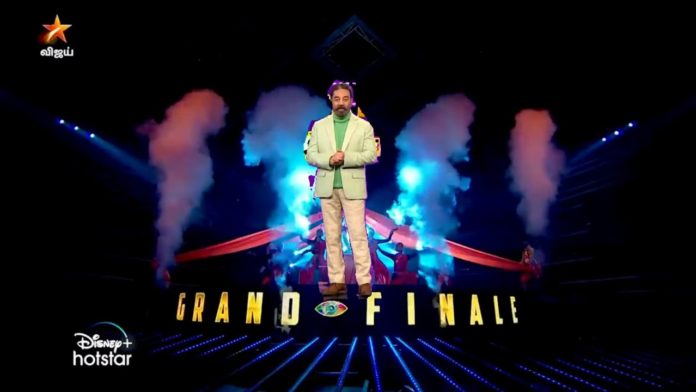 It is learned that the Bigg Boss show’s finale is going to take place today, 17th January 2020, and Kamal Haasan is all set to announce today who will be the title winner of the 105-day Bigg Boss show.

Five players, Aari, Balaji, Ramya, Rio, and Som, have qualified for the finals, and Somsheakr was evicted yesterday with the least votes among the five contestants. In the promo video released recently, Kamal Haasan said that Bigg Boss fans are eagerly waiting to know who is the title winner of season 4.

We have come to the final stage. Here one in four is the title winner. We are going to see it. Like the fans, we at Thenewscrunch are looking forward to the finale episode. The Grand finale even will run from 6 pm today for six hours.

We at TheNewcrunch will be covering the event live from 6PM on this page. The various sources and web portals are projecting Aari Arjunan as the title winner of Bigg Boss season 4. The final shooting has not happened yet, and hence the title winner will be known only during the show.

Actor Vijay Sethuapthi is rumored to grace the finale as chief guest. All the evicted contestants will be present during the finale event.

Aari Arjunan is the title winner of Bigg Boss season 4 Tamil, and he has won it by gaining maximum votes from fans.