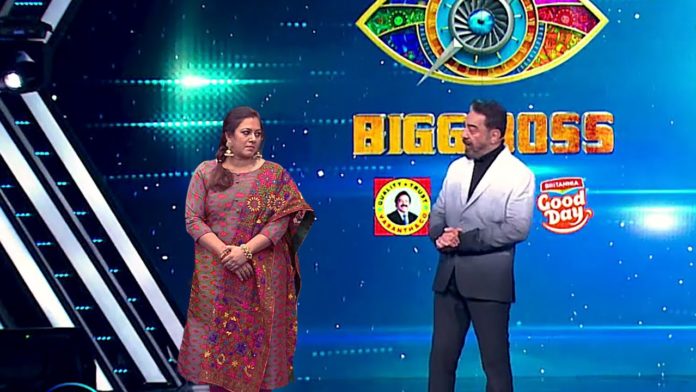 Bigg Boss Tamil season 4 Week 11 is coming to an end with today’s episode, and the eviction for this week will be made today by Kamal Haasan, depending on the voting results. The contestants with the least votes will get evicted in tonight’s episode. Earlier, there were reports of Aajeedh evicted from Bigg Boss house, but the shoot for this week is over, and it has been revealed that Archana will be eliminated from Bigg Boss house in tonight’s episode.

With Nisha and Jithan Ramesh evicted last week, it was a huge blow to the Archana group, and now, with Archana’s elimination, things will take a toll on Rio, Som, and Gabriella. So far, the show has 8 eliminations – Rekha, Velmurugan, Suresh Chakravarthi, Suchithra, Samyuktha, Sanam Shetty, and double evictions – Jithan Ramesh and Nisha.

Seven contestants were nominated for eviction this week, and they are Aajeedh, Aari, Anitha, Archana, Rio, Shivani, and Som. Out of these seven contestants Archana, Aajeedh, and Som secured the least votes. Aajeedh’s fewer votes were mainly due to his conflict with Aari as he faced Aari’s fans’ wrath. Archana is finally evicted from the house, and multiple sources have confirmed this.

With Archana leaving the Bigg Boss house, it will be interesting to see how things unfold from now as we approach the finale of this season.