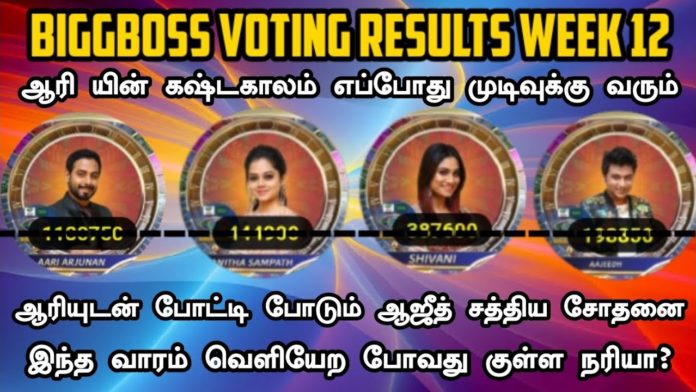 Bigg Boss Tamil Season 4 enters the final day of voting for a gripping twelfth week. Five contestants were nominated for eliminations in week 12 of Bigg Boss 4 Tamil. Ten eliminations took place so far and Archana was the last contestant to be evicted. A major twist was witnessed in this week’s voting results as Anitha annoyed the audience with her rants during the nominations for the best and worst performers of the week.


The ‘Ball catching’ task’s last day performances and the nominations for the best and worst performers for this week, is affecting voting results. Gabriella failed to impress in the ‘Golden ball’ round and ended up with zero points. Shivani failed to perform well which was not surprising. The prospects of either of the bottom three contestants leaving the house loom large though Anitha is at the bottom of the voting results from the first day.

This week’s voting results are seeing healthy competition in the top of the voting polls as the top contestants like Rio and Balaji are safe in nominations. The presence of one contestant from the ‘love bed group’ gave the audience a week to shift focus on Shivani, Aajeedh and Anitha.

The luxury budget task of this week was concluded with an interesting final round. The ‘Ball catch’ task was an all-nighter for two consecutive nights and concluded with a ‘Golden ball catching’ round which brought interesting twists. Rio and Somshekar’s performances in the task were noteworthy.

Captain Balaji was safe from nominations this week.

According to reports, Aari, and Shivani are likely to be safe this week.