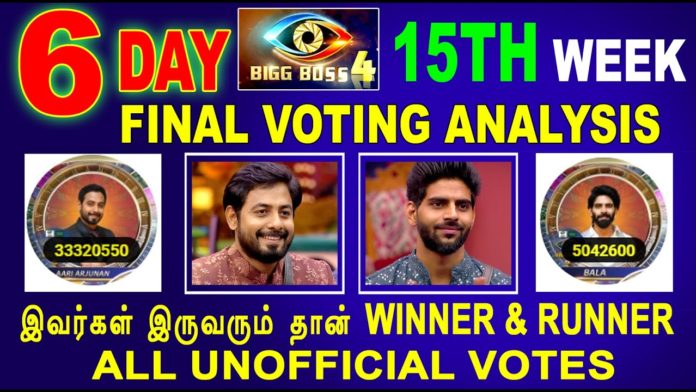 Bigg Boss Tamil Season 4 is on its last day with a suspense-filled ‘Grand finale’ episode in which the title winner will be revealed. All five finalists are in contention for winning the title during the ‘Grand finale’ weekend of Bigg Boss 4 Tamil. Fourteen eliminations took place so far and Gabriella was the first finalist contestant to be evicted. There are speculations that Somshekar will be the first contestant to be evicted on the Grand finale day.


Housemates’ emotional moments, finalists’ confidence in winning the title, and Gabriella’s eviction are impacting the audience mindset by considerable means. Somshekar’s hope for revival is bleak from the first day of finale week voting and his lull game seems to be a huge negative for his survival in the ‘finale’ episode.

This week’s voting results saw healthy competition in voting as the top contestants like Aari, Rio, Ramya, and Balaji are in contention for winning the title of Bigg Boss Tamil 4. Aari is cruising towards victory all the way in the voting results and the lead increased over Balaji, Ramya. Rio is lacking the intent to win which moved him below Aari and Balaji in the ‘finale’ week vote results.

The eviction of Gabriella and the demoralized finalists listening to the voices from outside was the highlight of Saturday’s episode. Rio and Somshekar were happy to see Gabriella on stage and they missed her. After Gaby’s eviction this week, Rio was dull and lost during the weekend episodes which was upsetting for his fans.

According to reports, Aari, Balaji, and Rio are likely to be in the top 3 on Sunday’s ‘Grand finale episode’.

According to reports, Somshekar will be the first contestant to be evicted on Sunday’s ‘Grand finale episode’. Ramya will be the second eviction after Somshekar.