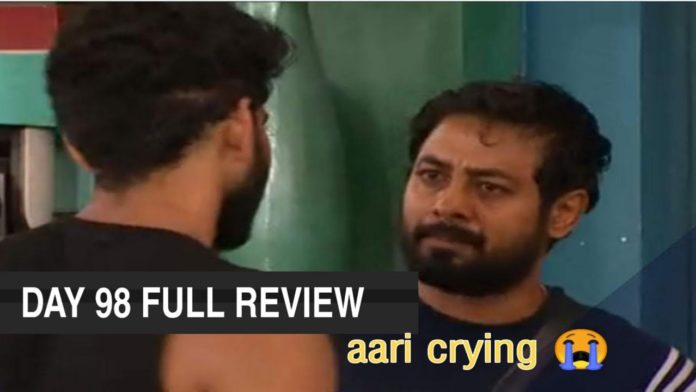 So far, on the Bigg Boss show, Balaji used to apologize to Aari once or twice a week routinely. But for the first time, Aari apologized to Balaji while crying, making the viewers resilient. Aari used some harsh words when he took Balaji by the rope’s hand in the ongoing rope pulling competition since yesterday. So enraged, Balaji took his hand from the rope and walked out.

If Aari had not spoken those words, surely Balaji would have succeeded in that task and got seven points. At this point, Aari’s eye was troubled when he saw the points when this task was completed ‘You left the hand because I said so, but all those who have already given up have got points.’ Aari apologized to Balaji, upset that the Rules meant everything was fine and even abusing was within the rules.

Balaji took it softly and said consolingly, ‘OK, let it be done. It’s over’. Mind-boggling scenes followed this. At the end of it, all the two became close friends after Aari said, ‘I apologize for everything that has happened to you so far with disrespect, I will ask you for advice even if it comes out’ and definitely ‘I will do what I can.’

Pointing to this, Kamal Haasan said that although last time there was a good change in Balaji and this change will happen not only to them but to everyone who sees it. Viewers are also commenting that this is the only emotional event that has taken place this Bigg Boss season.