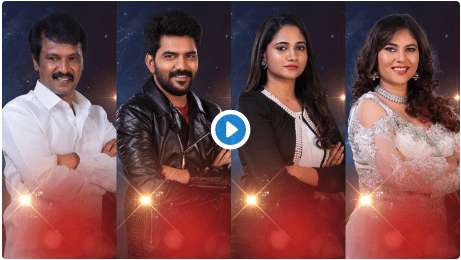 Bigg Boss Tamil 3 completed 85 days this week and the show is setup for some sensational twists in the coming days. The upcoming days in Bigg Boss Tamil 3 will be gripping as the #Tickettofinale tasks will start. Vanitha’s eviction is likely to reduce the amount of controversies. Last week was emotion filled with the near and dear ones of the existing contestants visited the house.

Fathima Babu, Vanitha, Meera, Mohan Vaidya, Reshma, Sakshi, Madhumita, Abirami and Kasthuri are eliminated so far. Vanitha was the last elimination from the Bigg Boss house. However, Cheran was lucky enough to get the secret room opportunity and is back in the house.


This week’s elimination nominations were Cheran, Sherin, Kavin and Losliya.

Who is Your Favorite Contestant This Week? Save them from elimination!!

None of the contestants were safe from elimination nominations this week.

This week’s elimination nominations were Cheran, Sherin, Kavin and Losliya.

To protect your favorite housemate from elimination, it is prerequisite to vote for him/ her by using the phone number mentioned here. Each Bigg Boss Tamil Vote sums because the one who has less voting will be sent out of the house at the end of the week. Here is the list of people who are in the house and got nominated for this week. Find your favorite contestant voting and make your vote count by following Bigg Boss Tamil Online Voting. To vote any contestant through phone, just give a missed call to the mobile numbers disclosed here. Each One is assigned with a unique number.
To save your favorite Tamil Bigg Boss Contestant this week, give a missed call to the below mentioned mobile numbers:

This is the very first time Sherin gets nominated for Eviction in Bigg Boss Tamil. She has never been nominated and doesn’t command a bigger fan base like Kavin, Losliya, Mugen or Cheran. All these people have been eliminated in the past and saved by people’s vote. We are not sure if Sherin commands such a fan base. We can see #voteforkavin and #Losliyaarmy already trending on twitter and they are bound to get maximum number of votes. Cheran will be saved for his reputation and so it’s between Mugen and Sherin. We personally feel Sherin should be saved as she has not done anything wrong. We have to wait and watch what happens this week.


Kavin Bigg Boss Tamil Season 3 – Will he be eliminated in Week 12?

Kavin has a huge fanbase and his negative seems to be working for him. Will his sacrifices for his friends end and will he start playing for himself?