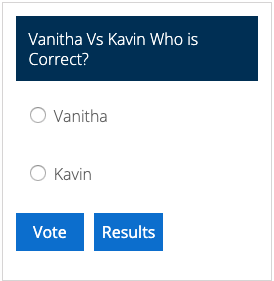 The fight between house captain of week 11 Vanitha and Kavin has reached peak in Bigg Boss season 3 Tamil. They both are arguing about the reasons given by Kavin for nominating Sherin and Cheran. Kavin said he nominated Cheran because he won national awards for his movie and Bigg Boss title is not important for him. He nominated Sherin because she acted in successful films like Thulluvadho Illamai and Bheema hence Bigg Boss title is not important for her. Vanitha called those reasons fake and said Kavin is not playing the game as a game and uses sympathy to gain vote. She further added that Sakshi would have played the game honestly over Kavin but she got eliminated because of him.

Kavin shouted back at Vanitha and brought her family issues into this saying her problems are completely different from what we are facing here. Whom do you think is right? Vote below.

Vanitha Vs Kavin Who is Correct?
Created with Poll Maker