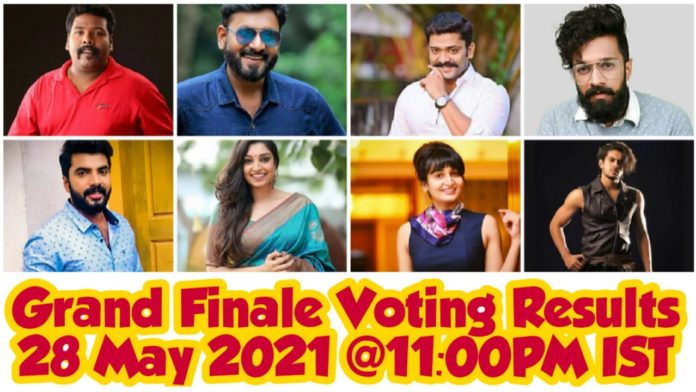 There are only a few days left to know who will be the winner in the third season of Bigg Boss Malayalam. The fans of each contestant are doing a great campaign on social media. There are 8 finalists. There are reports of strong competition in voting, as in the case of Bigg Boss House. Let’s see who is ahead in the voting so far.

According to reports, Rithu Mantra is the most contestant with the least votes in the finale poll. Ritu is one of the two remaining female contestants in Bigg Boss. Ritu was the captain when the show stopped. Rithu was one of the strongest performers in Bigg Boss House. With days left to vote, Rithu can only come up at the eighth position.

Nobi Marcos is rated by fans as the weakest contestant in the Bigg Boss House. This is because fans constantly criticize nobby for using others without directly participating in the tasks and not being very active. It is noteworthy, however, that Nobby was in the final eight.

According to the current voting status, Ramzan is in the top five. Ramzan ranks fifth on the list. Ramzan has a huge fan following on social media. Ramzan has critics as well among fans. Shoe-like behavior has caused a section of Bigg Boss fans to turn against Ramzan.

Dimpal Bhal, popularly known as the ‘Queen of Bigg Boss,’ is in fourth place in the polls. Dimpal is one of the people most likely to succeed in Bigg Boss. Meanwhile, Dimpal had to leave the show due to the death of her father. Dimple’s position may rise in the coming days.

To everyone’s surprise, there are indications that Anoop has bagged the third position in the polls. In the early days, Anoop was a contestant who did not have much popular support. But then Anoop’s fan base was boosted by his excellent performance in each of the tasks. In the last days of the show, Anoop had become a strong contender.

It is learned that Sai Vishnu is in the second position in terms of voting status. Sai Vishnu is one of the most fan base contestants of the third season. Sai Vishnu is also considered to be the most likely candidate to win Bigg Boss this time. Sai, who initially had no big fans, slowly created fans.

Manikuttan, also known as MK by fans, is the leading actor in the polls. Manikuttan is arguably the most popular actor in Bigg Boss. A large section of the fans thinks that Manikuttan will win. Meanwhile, fans were celebrating Manikuttan’s departure and return from the show. This voting status may change in the coming days.