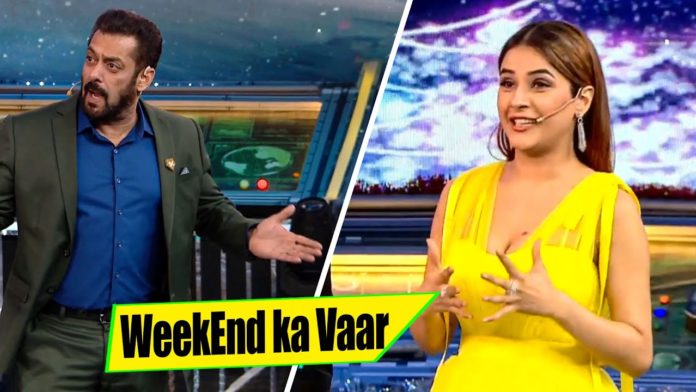 Bigg Boss 14 completes its 12th week amid much excitement, drama, and action. The Weekend Ka Vaar episodes on 26th of December 2020 was a star-studded affair with host Salman Khan taking the center stage. Three contestants were nominated for elimination this week. However, no eviction is planned for this week as Manu Punjabi did not return from his medical treatment.

The Sunday’s episode of Bigg Boss 14 Weekend Ka Vaar will feature the birthday celebrations of the host, Salman Khan. There will be multiple special events to grace this special occasion.

Jacqueline Fernandez and Raveena Tandon will be sharing the stage with the host Salman Khan ahead of his birthday weekend in Weekend Ka Vaar.

Salman Feels Rahul Vaidya Should not Win the Show

Rahul Vaidya is one of the most popular contestants of Bigg Boss 14. However, Salman Khan was irked with his voluntary exit earlier this month. However, the star singer came back into the Bigg Boss house. Salman Khan felt Rahul’s victory in the show will set a bad precedent that contestants can leave whenever they want.
Salman questioned, “It is unfair if Rahul Vaidya wins the show against those who have been in the show longer and did not quit it or walk away.”
However, Vikas Gupta imposed confidence on Rahul Vaidya and felt that he will make his ‘walking away’ a part of history and work to gain the faith of his fans again.

Harsh Lambachiya visited the Bigg Boss 14 WKV stage and reportedly taunted the NCB for the recent raids in his house. The NCB found drugs in his house. However, the popular host and KKK10 contestant snubbed the NCB in a veiled manner. Harsh said, “Aajkal mere ghar me bhi subhe subhe koi aajata hai aur bhaut kuch karke chale jaate hai”
This taunt did not go down well with the audience and they felt that Harsh should not be invited on stage as he is free on bail.

No Elimination this Weekend Ka Vaar?

Three contestants were nominated for evictions. Abhinav was leading the voting results and Eijaz was second. Rahul Mahajan received the least number of votes and was expected to be eliminated. However, Manu Punjabi has not returned form his medical treatment. Hence, Rahul Mahajan gets a breather for a few more days.

There will no elimination in week 12 of Bigg Boss 14’s Weekend Ka Vaar.