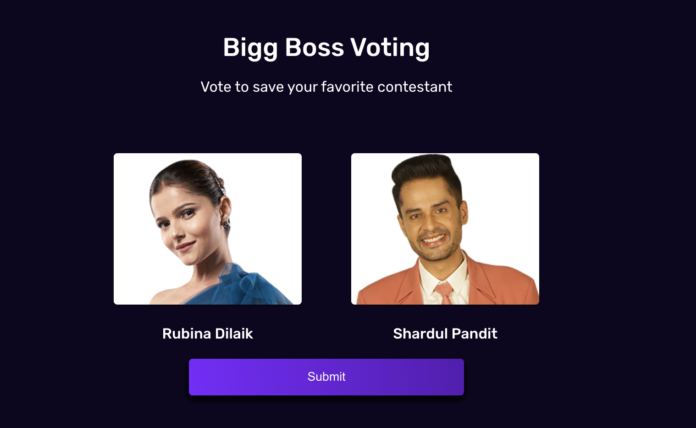 This is the second consecutive week that Shradul Pandit is nominated for elimination.

As of today, Rubina is leading the voting poll with maximum votes while Shradul is trailing by a huge margin. Rubina has a huge fanbase and a strong player. It will be difficult for Shradul to catch up with her. We will have to wait and watch what happens once the voting poll closes.

How to Vote for Bigg Boss 14 Eviction Nominees?

To know how to vote for contestant using the Mobile app – Follow the below steps.

For every episode of the Program, the period starting from Voting Start Date and Time and ending on Voting End Date and Time will be considered as voting cycle for that particular episode (“Voting Cycle”).

The Voting Poll will tentatively start from 11 P.M. on Monday and end on 11.P.M. Thursday for the Shortlisted Participant for that week, subject to changes as per the discretion of Viacom18.

Any change in Voting Cycle will be notified by way of Astons on-air specifying the end time of voting.