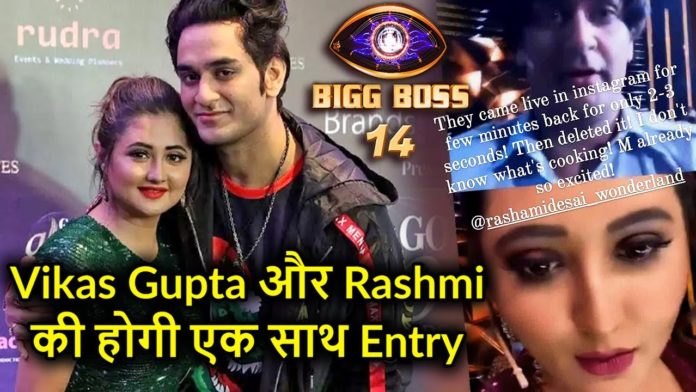 Family Week is going to start in ‘Bigg Boss 14’ house. On this special occasion, the contestants of the show will be able to meet their family members. Bigg Boss will give contestants a chance to meet their friends and family, including Abhinav Shukla, Eijaz Khan, Nikki Tamboli and Rahul Vaidya. Vikas Gupta will not have any family members coming and hence to boost the morale of Vikas Gupta, TV actress Rashami Desai will be entering the house.


In ‘Bigg Boss 14’, Vikas Gupta claimed that his mother has become angry because of talking about his identity. After which Vikas Gupta had claimed crying that his relationship with mother deteriorated due to brother Siddharth Gupta. With this, Vikas Gupta has also realized that he cannot live without his family.

Vikas Gupta is missing his mother a lot in ‘Bigg Boss 14’. Letters came from everyone’s houses on the occasion of Christmas, but Vikas Gupta could not get this opportunity. In this situation, Vikas Gupta was very disappointed. During Christmas, Vikas Gupta said that his mother would not send letters because she is angry with his son.

Vikas Gupta also got a chance to be a part of the show during ‘Bigg Boss 13’. During this time Vikas Gupta played the game with Sidharth Shukla, not supporting Rashami Desai. At the same time, forgetting the old things, Rashami Desai has reached out to support Vikas Gupta.