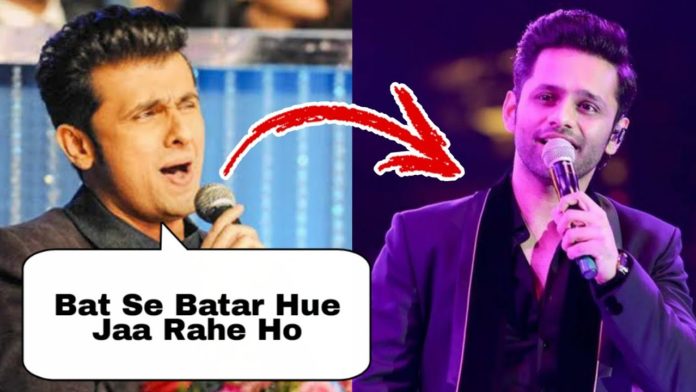 ‘Bigg Boss 14’ contestant and singer Rahul Vaidya has participated in the singing reality show ‘Indian Idol‘. Rahul was the second runner-up in the first season of this show. An old video of the season he participated in is going viral on the internet these days. In this video, singer Sonu Nigam and musician Anu Malik are seen scolding Rahul Vaidya.

‘Performance is getting worse’
In this video, Sonu Nigam is seen commenting on Rahul’s performance. He said, ‘You are getting worse and worse with every performance. What you sang first, you sang so well that Anu Ji told you, ‘Tu Aag Aa Re,’ do you remember? And we said that you would probably come in as one of the finalists. After that, when you sang, you sang the same song a little poorly; the one you sang yesterday also didn’t sing so well. You have sung very poorly today.

Anu Malik further said, ‘You have so much overconfidence in yourself. In the eyes, in the face, there is an attitude of me, that no one acts, it is only me. It is visible in your voice. The humility that is there, the humbleness that comes in the voice. So what were you singing before? When you came, your hunger was visible. Today you have come here; we do not see your hunger. You think, yes, I have come. ‘ Rahul Vaidya was the runner-up of ‘Bigg Boss 14’ and is currently in Cape Town to participate in season 11 of ‘Khatron Ke Khiladi.’

Allegations of false praise
Significantly, this video of ‘Indian Idol’ also matters because these days, there are such statements of celebs constantly claiming that the producers pressure the guest to praise the contestants. Whatever the singer sings, you have to praise. These allegations have been made by Amit Kumar, the elder son of Kishore Kumar.

In the special episode of ‘Indian Idol,’ Kishore Kumar’s son Amit came as a guest. He said that he was asked to praise every contestant. Recently, Sunidhi Chauhan has also said in an interview that she was asked to give false praise to the contestants.