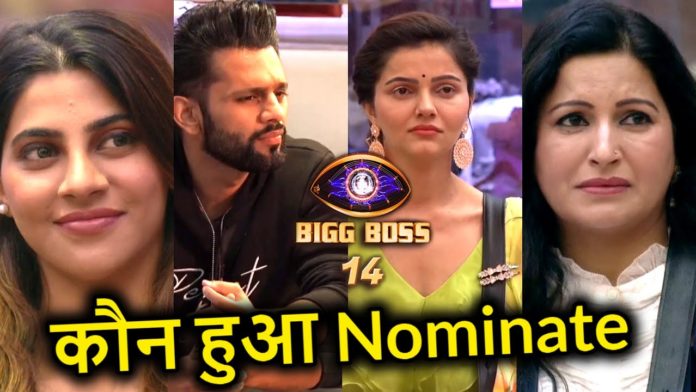 Bigg Boss 14 is entering a very decisive phase in the competition. After a lull start, the 14th season of Bigg Boss Hindi spiced up after the exit of the ‘seniors’. Rahul Vaidya, Rubina, Eijaz Khan, and Jasmin Bhasin made major inroads in terms of popularity. The Weekend Ka Vaar episodes this weekend will mean the end of the road for one of the four nominated contestants.

Mondays are traumatic for the contestants as well as the audience. The nominations task for this week was entertaining. However, four contestants were nominated and the eviction suspense will conclude this weekend.

The entry of Siddharth Shukla and Rashmi Desai will spice up things this week. With just four weeks left for the show’s finale, Bigg Boss 14 will feature three more eliminations.

The nomination tasks get tougher by the week. This week’s nomination task featured a very interesting concept of self-control. According to Bigg Boss, the contestants will sacrifice one area of the house until they are released to do so. As a result, each contestant will choose one area they can’t access to save themselves from nominations.

As a result, Aly Gony chose the kitchen. Nikki Tamboli chose the bedroom while Rubina chose the dining area. Devoleena sacrificed the spa while Rahul Vaidya gave up the gym. Abhinav gave up on the luggage area and Rakhi left the smoking area. Arshi Khan gave up the toilet and bathroom zone.

As a result of their lapses, Rahul, Nikki, Devoleena, and Vikas were nominated for eliminations this week. Interestingly, this is the first week Rubina is safe from nominations.