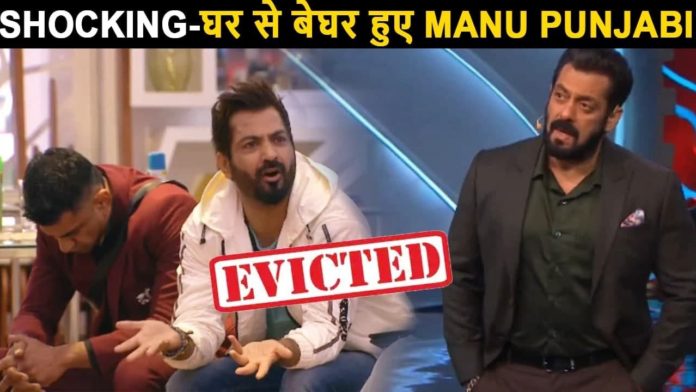 In Bigg Boss 14 many unpredictable things are happening and one such news is the eviction of Manu Punjabi. In the special episode of Weekend Ka War itself on the previous day, Salman Khan also said openly that three times people came and went from the show. Right now the discussion about the entry of ‘mastermind’ Vikas Gupta in the house is going on that now the makers have given another shock. According to the latest reports coming out, Manu Punjabi has been eliminated from the show due to poor health conditions.


The Khabri a famous Twitter handle about Bigg Bosss, has given information about this latest update. It has been reported that Manu Punjabi’s shocking elimination has taken place from Bigg Boss house and it will be aired in the next episode. However, Manu Punjabi has been evicted for his ill health. In such a situation, fans of Manu Punjabi are surely going to be shocked by this news.

New wild card contestants will come on the show
Some more interesting twists and turns are yet to come in this show. While the makers are about to get Vikas Gupta’s entry in the house once again, Haryana BJP leader Sonali Phogat is also going to come to the house through a wild card. Apart from this, two more people will also come to the house as wild card contestants. So this time this TV reality show is giving a lot of surprise to the audience.

News of Vikas Gupta’s entry created sensation
Meanwhile, there is a lot of excitement among fans about Vikas Gupta’s re-entry. Vikas Gupta was evicted last week after a bitter fight with Arshi Khan. Actually, Vikas Gupta angrily pushed Arshi Khan into the pool. After which the makers took this step. Now his re-entry is confirmed and he is expected to enter the house in tonight’s episode.