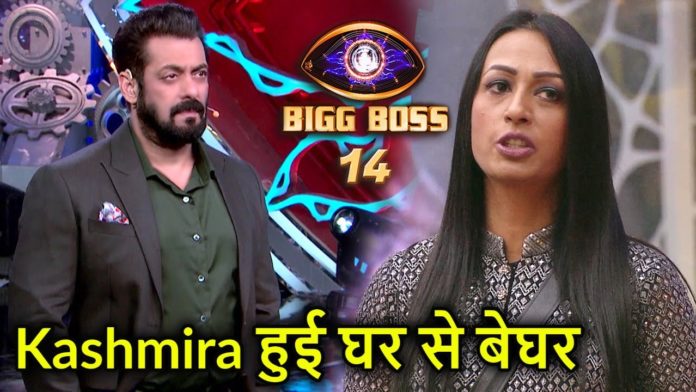 A piece of shocking news is coming from Bigg Boss 14 about this week’s eviction. At the same time, Arshi Khan had decided to leave the show midway after Salman Khan questioned her in the episode of ‘Weekend Ka Vaar,’ now, someone else is also getting eliminated this week.

Salman Khan fiercely classed Arshi Khan’s behavior with Vikas Gupta, and in the end, she decided to quit the show. Rubina also made many accusations against Arshi. Seeing herself surrounded from all sides, Arshi starts leaving Bigg Boss’ house. But it is reported that instead of Arshi, Kashmera Shah is evicted due to fewer votes.

According to a tweet, ‘The Khabari,’ which gave all the information related to Bigg Boss, Kashmera Shah was evicted from Bigg Boss house. The door of the house was also opened for Arshi Khan, but she refused to leave.

Door was also opened for #ArshiKhan but she didnt go

Kahsmera Shah has been eliminated from the show due to low votes. However, no official confirmation has come from the channel or the show makers, so who is evicted and not will be known in this Weekend Ka Vaar episode. Kashmera Shah had entered Bigg Boss house with Vikas Gupta and other challengers a few days ago. She was one of the strong contestants.