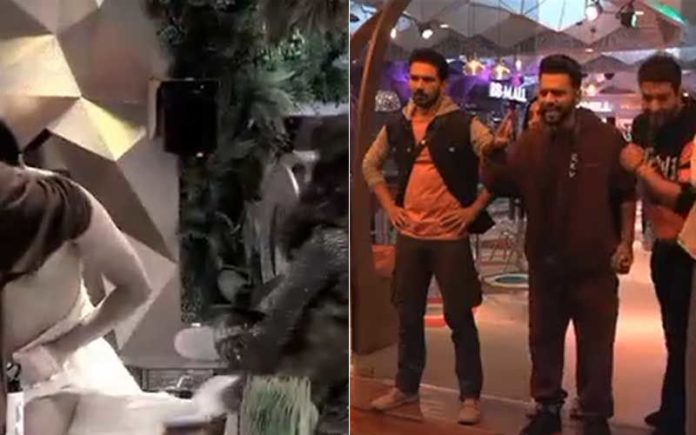 Bigg Boss 14 gears up for a fiery week ahead of the aftermath of the ‘Julie Ka Badla’ task. The recent fight between Rakhi Sawant and Jasmin Bhasin set the tone for a fiery week. Jasmin dropped a duck head prop on Rakhi’s head and Rakhi got injured after this event.

Rakhi Sawant blew up the issue and Rahul Mahajan was shocked with the recent developments. However, the captaincy task went the wrong way on the 30th of December. Rakhi’s antics irritated Rahul Vaidya and Rahul Mahajan.

During the task, Rakhi Sawant’s aggression translated into fierce physical acts like removing Rahul Mahajan’s dhoti. This was after Rahul Mahajan called her ‘Buddha’. This act of Rakhi pissed off Rahul Vaidya, Aly Goni, Vikas Gupta, and Abhinav Shukla. Rahul Vaidya questions Rakhi’s bizzare act while Aly Goni questions if such an act could be performed on a female contestant in the show.

Rakhi went on to hold Rahul Vaidya by the neck which was seen as a physical violation against a fellow contestant. Following the events on Wednesday’s episode, the captaincy task was terminated.