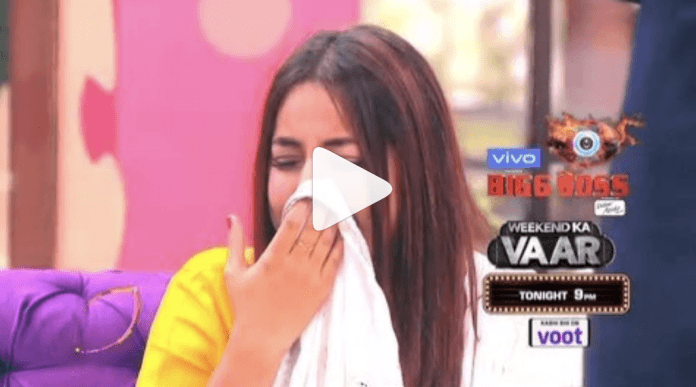 In Bigg Boss 13, whenever Weekend Ka Vaar is aired, the drama in the house increases even more. The reason for this is that sometimes Salman Khan counts the mistakes of people and sometimes gets angry. By the way, in the coming episodes too, you are going to see something similar. This time, Shehnaz Gill is not going to be the victim of Salman Khan’s anger. We are not saying this, rather, the new promo of Bigg Boss 13 is proof of this.


If the new promo of Bigg Boss 13 is to be believed, Salman Khan is going to take the name of Shehnaaz Gill for this week’s Eviction. This week, double eviction is to be held in Big Boss. In such a situation, this words will fall on Shehnaaz Gill as well as Madhurima Tuli.

That thing is different, Shehnaaz Gill is seen crying loudly in the promo after hearing her name from Salman Khan’s mouth. Crying Shehnaz Gill is telling Salman Khan that, if I did not entertain people for four days, then I am ready to be thrown out of the house.

Salman Khan’s anger will come to the sky as soon as he hears such a thing from the mouth of Shehnaz Gill. While overcoming his anger, Salman Khan will tell Shehnaz that, if she is out, she is out. What is the point of doing drama in this? To speak once or to be out thrice means to be out.

Upon hearing this talk of Salman Khan, Shehnaz will start crying loudly and will fall, in which Vikas Gupta will take care of Shehnaz. Shehnaz does not know that she is not going anywhere from home. Salaman Khan had just made a small joke with Shehnaz. By the way, how excited are you to see this drama happening in the show, share your views in the comment section below.