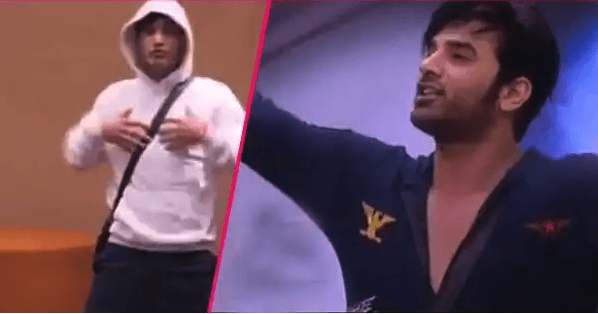 Bigg Boss 13 which is entertaining the fans with its high-voltage drama is back with yet another captaincy task during week 7 and those who becomes the captain for week 8 will be safe from elimination. As Aarti became the first Captain of the Bigg Boss house, followed by Shefali, the contestants are all geared up for the next task and will fight to become the next Captain of the house.


Bigg Boss announced the new captaincy task wherein Asim, Arhaan and Vishal are kept inside a cave. The housemates will be provided with snow and will have to stuff the snow inside the cave to stop them from coming out of the cave. The contestant who comes out of the cave shall break a plate of any of the other contestants and that person will lose their chance of becoming the next Captain of the house.

The task will be more interesting to watch because as we know the house is divided into two groups. On one side, Sidharth Shukla’s group will stop Arhaan from coming out of the cave, on the other side Rashami and the team will stop Asim. Here, Vishal who is neutral in the house has got a clear advantage as the whole house is already in support of Vishal. Bigg Boss announced that he will be one of the contenders and now only Asim and Arhaan will be inside the cave.

Arhaan gets the opportunity to come out of the cave and if the sources are to be believed Vishal Aditya Singh, Paras Chabbra, Mahira Sharma and Devoleena Bhattarcherjee will be competing for the captaincy task. It’s believed that Vishal may win captaincy as he is considered to be the strongest of them but there are sources which say Devoleena won it. We will update as soon as we get information from credible sources.

Vote to save your favourite contestant
Create Online Surveys