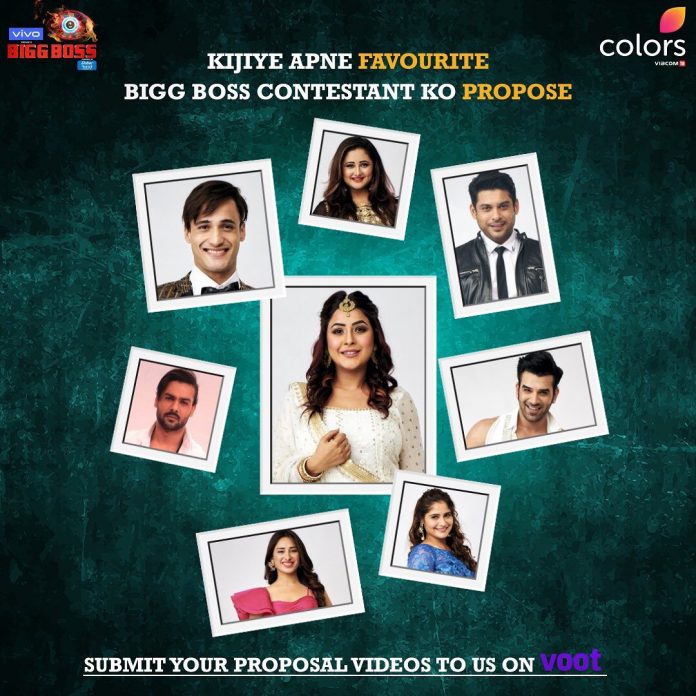 Bigg Boss 13 enters its week 19 and the nomination process has completed . The drama, chaos, fun and fights continue to a great extent in the Bigg Boss 13 house. A lot of shoulders have been rubbed this week and Siddharth and Shehnaz’s nomination for eliminations is crucial. As Bigg Boss 13 enters the decisive phase where contestants and audience are not yet out from the ugly spat between Shehnaaz and Sidharth, the nineteenth week elimination of Bigg Boss 13 this week will be a very important one.


There were no captains last week as the captaincy task was abruptly stopped. Siddharth’s period as interim captain has expired. It must be noted that Arti is trailing in his vote share and there are reasons that she may get evicted from house this week. Surprisingly, only all seven nominations are announced for this week and Arti is clearly the weakest.

One of the big guns,Siddharth Shukla is nominated this week as well and he has gained more than 23% of the votes during the opening day and is in third position. However, Shehnaz has sprung up and her fans are supporting her hands down. She is slightly ahead of the audience voting share of Asim Riaz.

The weekend ka vaar episodes promise a lot of action and suspense as the host Salman Khan digs into the happenings of the week. Though eviction nominations have been announced, it is becoming quite obvious that Arti Singh or Mahira Sharma will be evicted this week.

Unexpectedly, Shehnaz Gill is leading over Sidharth and Asim are leading in major polling reports since day 1 of audience voting. However, it was surprising to see Shehnaz get nominated for eliminations this week. Though the contestants are fighting hard to get saved from evictions, the tasks are getting tougher and intense by the day. The battle is intense for the final week of eliminations

Shehnaz and Asim are alone at the top with a whopping 71% vote share between them. However, these are early trends and will swing either way. Arti Singh is not safe by any means considering Rashami’s upsurge. A shocking twist can be on the cards as the battle between Arti and Mahira is likely to be the story of this week’s eliminations.

Shehnaz Gill’s Press Conference Is Triggering Votes In Her Favor?

Shehnaz is leading the audience voting comfortably. Punjab ki Katrina, Shehnaz Gill is a natural entertainer but as pointed out by the press she can be very irritating at times. She might consider flipping a talent but in reality it means the person doesn’t have their own backbone. This is very apt in the case of Shehnaz who moves in the direction which she sees profitable. This kind of behaviour is not appreciated by her fellow contestants but Shehnaz finds this to be entertainment.

Will There Be Double Eviction This Weekend?

A double elimination this week could mean disaster for someone in the house. It would be interesting to see if Arti Singh will be the only contestant to get eliminated this weekend. If there is double elimination, Shehnaz or Siddharth might not be evicted as they are potential finalists. Mahira’s lead at the top is too strong for him to be in the bottom two. An interesting twist could be on the cards this weekend if double eviction is a possibility. Mahira, Arti Singh and Paras will be fighting for literally one spot in the top 5.

Arti Singh and Mahira In A Twisted Fight To Get Saved from Elimination!

This week’s elimination voting results promises to be a close fight till the end. Currently, based on numbers, Arti is in the bottom. However, Mahira is clearly very close to each other. The vote swing can go either ways but the bottomline is this week’s elimination will be too close. Arti Singh is also in the bottom but her vote share has been worrisome compared to the other three contestants. Will Siddharth’s fans attempt to save Arti Singh?

The fight is majorly between Arti Singh and Mahira even though the latter is leading. Siddharth and Shehnaz are potential finalists of Bigg Boss 13.

There is no dearth for violence in the house. Sidharth took violence to an all new level as seasoned contestants like Paras and Mahira are playing more sensibly now. We have seen Siddharth and Shehnaz resort to physical tussles and so have many other contestants. However, this seems a great way to gain coverage and the contestants seem to understand that.

Shehnaz Rubs Shoulders with Siddharth, Will She Succeed in Her Fight?

Shehnaaz is one of the most favored contestants of Bigg Boss 13. While she has a huge fan base and is likely to be saved from eliminations, she made some shocking flips during the elimination nominations for this week. Sidharth and Shehnaaz fight started when Sidharth saves Arti during eviction nomination than her befriend and rumoured girl friend Shehnaaz Gill. Now she has joined with Sidharth’s rival Asim Riaz. We have some interesting episode coming tonight.


Who is Your Favorite Contestant?