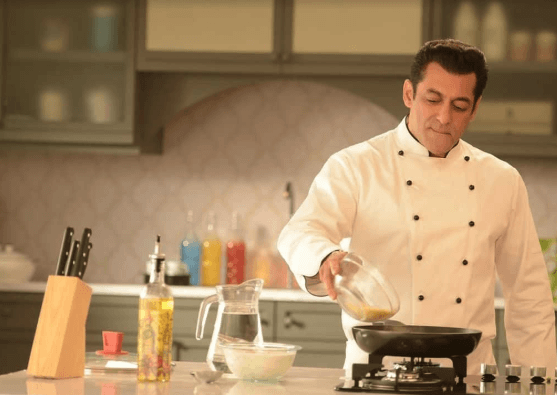 Fans are eagerly waiting for Bigg Boss 13, the most popular and controversial reality show of Colors TV. The promo video of the TV show will be released soon. A photo has surfaced from the promo video in which Salman Khan is seen wearing chef’s uniform. Also, some details about the new season of the show have also been revealed. Apart from this, Colors has also indicated through an animated video that the release date of Bigg Boss 13 will be revealed soon. However, no date has been revealed so far.


In this photo, Salman Khan is seen cooking something in the kitchen wearing the uniform of the chef. Salman Khan is seen making Khichdi and Raita in the promo video of the reports. Talking about the show, this season will only have celebrity contestants and the commoners will not be included in it.You can also Surbhi Jyoti and Karan Wahi included in the video. Before this, promo video of Salman Khan Surbhi Jyoti has been seen. The interesting thing this time is that only the mail voice of Bigg Boss was being heard in the show, whereas now the female voice will also be heard with them.

The names of the parties whose names are being discussed in Bigg Boss 13 include Vijender Singh, Devoleena Bhattacharya, Rajpal Yadav, Dayanand Shetty, Siddharth Shukla, Mahika Sharma, Meghna Malik, Pavitra Punia and Aarti Singh. There is also a rumor about the release date of the show that Bigg Boss 13 will be premiered at the end of September on Colors. The animated video released by Colors states that the show is set to launch soon.

Television ka blockbuster lekar aa rahe hain the one and only @beingsalmankhan! Are you ready for #BiggBoss13 with a twist that's super tedha? @vivo_india #BB13 #BiggBoss coming soon! Anytime on @voot