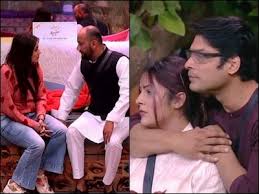 The day is finally here which everyone has been eagerly awaiting for. The last four months have been an emotional rollercoaster for anyone who had invested themselves into Big Boss 13. Big Boss 13 taught everyone to come together and give unconditional love to one contestant. One such contestant who has received love for the content provided and won over the support of fans is none other than Shehnaz Gill. Shehnaz has been loved for her entertainment factor and she has gained popularity over the last few months. She is currently one of the finalists and her whole following is eager to see her lift the trophy.

During this crucial time, Shehnaz’s father reportedly commented that his daughter has been used by the makers to help Siddharth Shukla win. His claims put us in two minds as people watching the show clearly know that Siddharth never went running behind Shehnaz on the other hand she would never leave him. Shehnaz latched on to Siddharth months ago and refuses to let go. She terms this relationship as an emotional attachment but many have claimed that this is merely her tactic used to stay on in the game.

Shehnaz’s father has even said that Shehnaz is only paid 10 lakhs for all that she has contributed to the show. He goes to say that for Shehnaz’s next show ‘Mujhse Shaadi Karoge’ is something he is against and he won’t let it happen. He claims to be a part of a reputed political party and will bring this show to an end. It looks like grapes have turned sour. Earlier on Shehnaz’s father was in praise of Siddharth because he took care of his daughter and supported her throughout. As per reports, Shehnaz Gill will come in third place which is why such a reaction was given by her father.