Bigg Boss 13 Latest Updates: This season of TV’s most popular show Bigg Boss 13 has been as successful as this season. More than that this season has seen a lot of fighting and fighting among the contestants. Not only this, Bigg Boss winner and ex contestant, many celebs have also supported the members present in the house, and many have also fiercely beaten them. Meanwhile, Bigg Boss winner Gautam Gulati has tweeted in view of Siddharth Shukla’s anger.


Gautam Gulati tweeted, “I told that Sid is doing well and has a huge fan following, but anger can become a problem for him, so ignore it but don’t understand.” All I want to say to my fans is that they support #ShehnaazGill because I notice from the point of entertainment. ” Gautam Gulati had also entered the house of Bigg Boss 13 on the recent Weekend Ka Vaar. After going to the show, Gautam also performed a romantic dance of Shehnaz Gill. Which was quite liked by the audience. 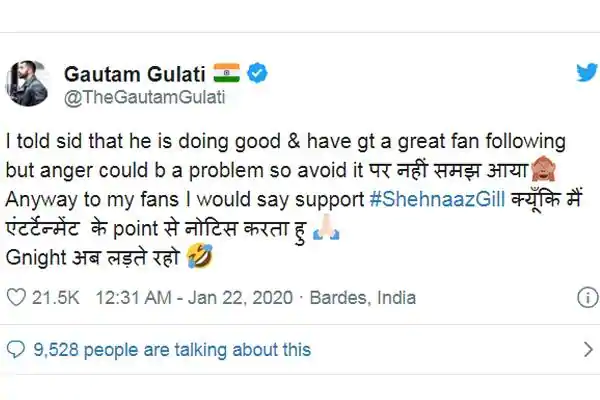 According to the reports, in today’s episode, all the contestants including Aarti Singh, Asim Riaz, Vishal Aditya Singh, Rashmi Desai, Paras Chhabra, Mahira Sharma and Shefali Jariwala are homeless this week. Are nominated for. Shahnaz Gill and Sidharth Shukla have become safe from the process of this week’s nomination. Viewers are also eagerly waiting for today’s episode. Do you support Shehnaaz Gill, comment below.