Bigg Boss 13 is heading for a high voltage Weekend Ka Vaar with some electrifying fights in store for the audience. Bigg Boss 13’s most popular contestant Siddharth Shukla looks safe this weekend. However, all the contestants are nominated for eliminations this week. According to the happenings in the house, it looks like there is a very tough competition between Arti Singh, Madhurima and Vishal for the eliminations this week.

Dolly Bindra’s Stunning U-Turn with Support for Mahira’s Safety After Shaming Her Earlier in the Season?

This edition of Bigg Boss has witnessed a lot of celebrities taking to social media to voice their support for their favorite contestants. A few weeks ago, Dolly D Bindra made a stunning statement on social media which is being interpreted as unprecedented bias by the fans of Asim and Rashmi. According to Dolly, Asim, Rashmi and Arhaan lack identity in the entertainment world and they are totally dependant on Siddharth Shukla to gain attention or respect.Dolly also said that Asim, Rashmi and Arhaan are the troublemakers in the Bigg Boss 13 house and removing them out of the house will make BB13 more fun and romantic.

It is clearly evident that Dolly Bindra is a strong supporter of Siddharth Shukla and she loves anyone associated with him. After witnessing the elimination nominations for this week, Dolly voiced her support for Mahira Sharma and Shefali Jariwala.

Listen #MahiraSharma #ShefaliJariwala have to be saved #BB13 #BiggBoss13 @BiggBoss

However, an older tweet of Dolly Bindra has surfaced on social media where she body shamed Mahira Sharma. This was during the period when Bigg Boss 13 was about Paras vs Siddharth and Mahira was on Paras’ side. She was bent upon ensuring that Mahira does not get any votes. Dolly Bindra shamed Mahira’s looks by stating, “Mahira doesn’t have dimples, but has big pimples and a big lipped mouth!”. 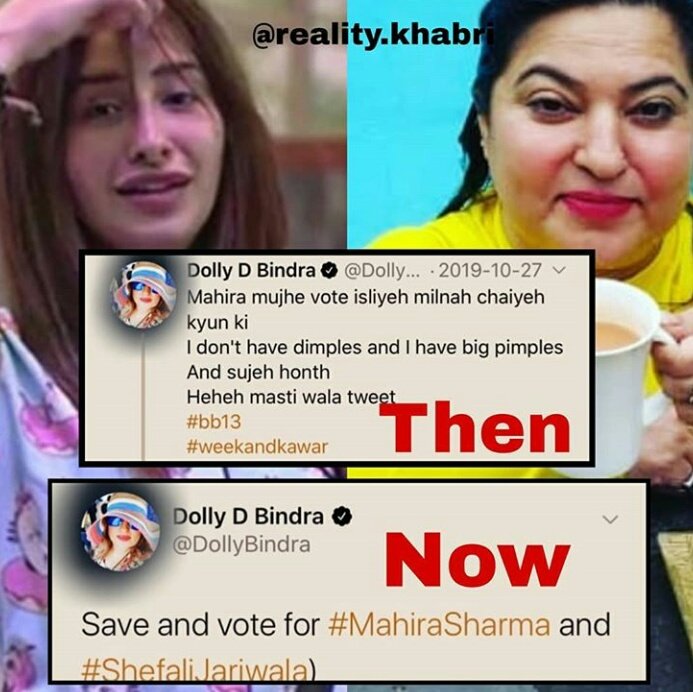 This was brought out to the open by a Twitter handle called reality khabri.

Do you think Dolly Bindra is blinded by her support for Siddharth Shukla?