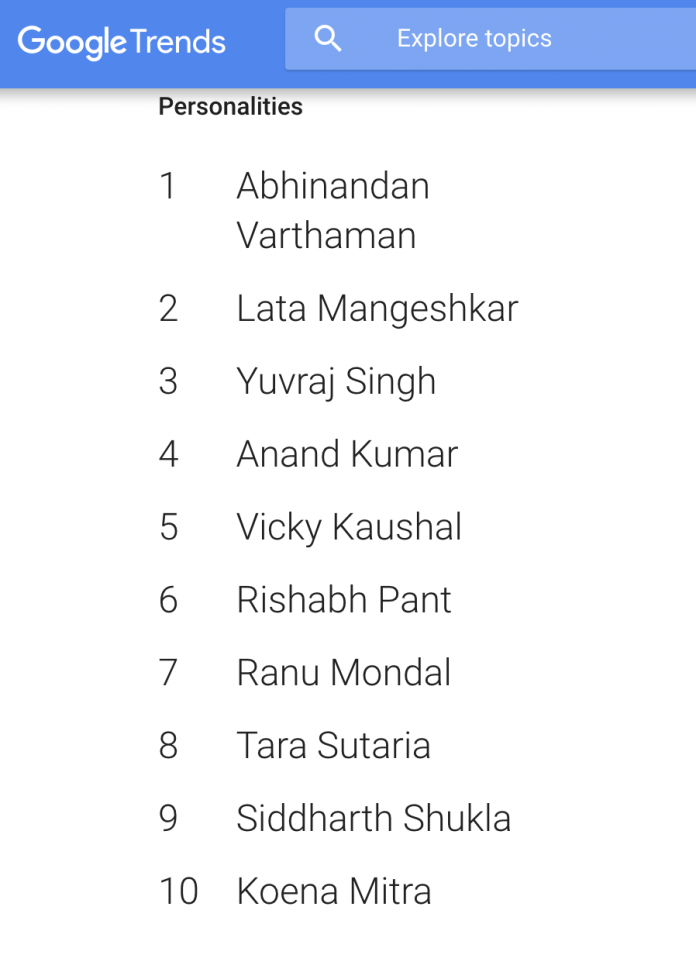 Most popular actor of TV, Sidharth Shukla is seen as a contestant in Salman Khan’s TV reality show Bigg Boss 13 these days. These days, Siddharth is also one of the most famous contestants of Bigg Boss. Recently, Siddharth Shukla was taken out of the house due to typhoid in Bigg Boss. After leaving the house, Bigg Boss currently keeps him in the secret room and in this room he is accompanied by Contestant Paras Chhabra. But now what we are going to tell you, you will also be surprised by the information. As in this list of the top 10 search personality of the year 2019, 2 contestants of Bigg Boss 13 are included.


Yes, Siddharth Shukla is at 9th position in this list of Top 10 and with this, he is the only TV actor named in this list. Siddharth Shukla has become the most searched personality of TV in the year 2019. The first place in this list is Indian Air Force Wing Commander Abhinandan Varthaman (Indian Air Force Wing Commander Abhinandan Varthaman). It is followed by the famous singer Lata Mangeshkar. Some time ago, rumors of Lata Mangeshkar (Lata Mangeshkar) being dead had started, after which the fans started searching them on Google. Bollywood actor Vicky Kaushal is ranked 5th in this list and by staying 10th, Bigg Boss 13’s ex-contestant Koena Mitra (Koena Mitra) has made it to this list.

Talking about Siddharth Shukla, he started his acting career in the year 2008 with the TV serial ‘Babul Ka Aangan Chhote Na’ (Babul Ka Aangann Chootey Na). After this he was a part of many shows. But in the TV industry, she was rightly identified with the TV serial ‘Balika Vadhu’. After this, Siddharth entered the Bollywood world with Varun Sharma and Alia Bhatt’s film Humpty Sharma Ki Dulhania in 2014.