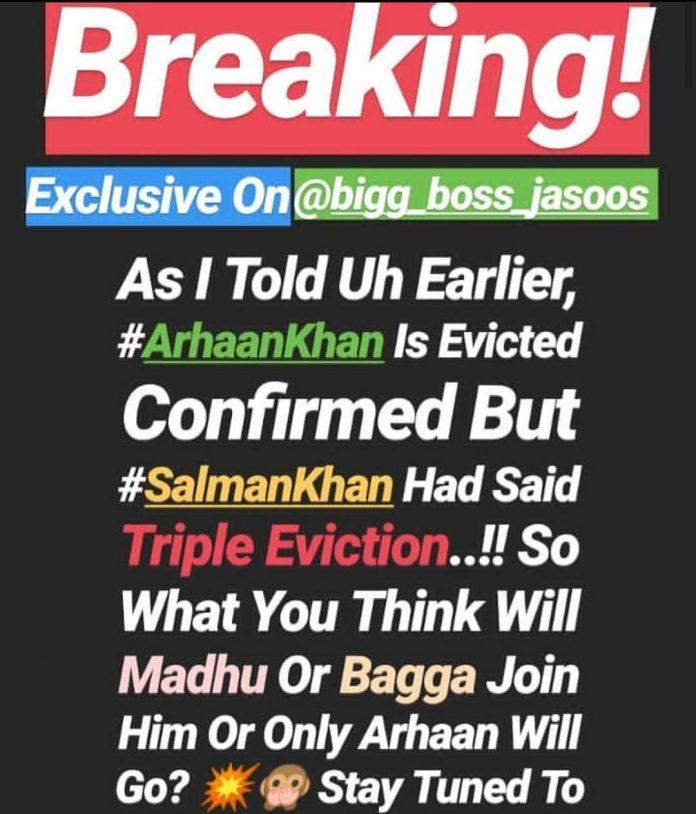 There is a shocking twist to Bigg Boss 13 weekend ka vaar Sunday 29th December 2019. It was initially announced that Arhaan Khan is evicted but now there are news that along with him there are two more evictions which means it’s a triple eviction scenario. This week’s weekend war in Bigg Boss 13 is going to be very rude. After a fierce fight between Sidharth Shukla and Asim Riaz at home last day, Rohit Shetty’s entry has put a break on the dirty fight between them. But now the time has come for elimination. According to the latest reports that emerged, Arhaan Khan’s card has been eliminated from home this week. But there are chances that two more contestants will be evicted this week. For this reason, besides Arhan Khan, the sword of danger hangs over the heads of these two contestants.


According to the report of ‘Bigg Boss Khabri’, giving information related to Bigg Boss, Arhaan Khan has been eliminated. While Shefali Bagga and Madhurima Tuli are also in danger. Although their name has not been confirmed yet, but maybe one of them will have to look out of the way. So there are full chances of double elimination this week.

The elimination round was canceled last week. In such a situation, there will definitely be elimination this week. That is why makers can also get double or triple elimination. As far as the matter of Arhan Khan is concerned, he was walking in the bottom of many voting trends. In such a situation, he is confirmed to be evicted this week. But before Arhaan Khan’s elimination, Salman Khan is going to give a grand party to all the family members. He will give a grand party at home after his birthday. The makers have also made special arrangements for this. By the way, do you think that Arhaan Khan’s elimination is quite right? Please tell us your opinion in the comment section.