The season 3 of Bigg Boss Tamil is off to a great start in terms of TRPs. However, with the elimination of Vanitha, Mohan Vaidya and Meera Mithun, the sensationalism and drama is reduced drastically.

This week’s major highlights included the dances performances by various contestants and the tug between Sakshi and Kavin. Kavin released a whopping twenty minute speech where he admitted to do things for camera attention. At the same time, Kavin accused Sakshi Agarwal of following the same strategy. Sakshi’s period as captain is probably the worst in the history of Bigg Boss Tamil.

What is Losliya’s Confession About? 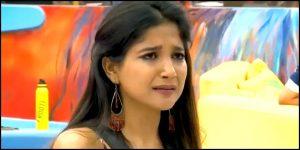 Losliya’s fan ‘army’ is absolutely shattered with apology rendered by their heartthrob. In the promo, Losliya apologizes with her hands folded and begs her fellow contestants to stop talking to her.

Will Losliya continue to get the sympathy and love of the fellow contestants after this apology? Will Sakshi and Kavin reinvent new strategies to keep their heads safe in the Bigg Boss house? Only time will tell.