The Bigg Boss house is jam packed with some of the best entertainers and one of them is Sandy Master. The 33 year old choreographer has been entertaining the audience since day one. While the house is shaking up because of unexpected twist and turns here are some interesting facts and unheard stories about Sandy. He has worked with some of the irreplaceable movie stars of Tamil movies. His passion for dance has completely changed his life. A boy who had the dream to dance on-screen has given some of the best routines for so many songs.

All about the Young Sandy

Sandy Master, whose original name is Santosh Kumar was born on the 5th of July, 1986 in Chennai, Tamil Nadu. He completed his college and schooling from Chennai. Sandy started dancing right when he was just 3 years old and since then nothing could stop him. He comes from a Tamil Catholic family. Sandy’s father is a retired police officer and his mother is a housewife.

Sandy’s career got the real boost in the year 2005. In a reality show called Maanada Mayilada he was given the chance to choreograph a team. Sandy’s hardwork paid off as his team won the competition. By the end of the show one of the judges, Lata Master, liked his work so much that she helped out Sandy in getting more chances to choreograph in shows.

He started working many other reality shows as a choreographer. In not time he was hired by Vijay TV. This brought his really closer to the industry and helped him landing the first big project. In 2014 he got the movie Aaaah which was a big achievement for him at that time. Currently he has 3 dance studios where he himself teaches the students and holds workshops. Dancers from wide across the country and some from abroad as well are enrolled in his studio.

The Big Turn in Sandy’s Life

Much like everyone, fortunes have been hard on Sandy as well. His first marriage took place in the year 2009. He was married to the South Indian actress Kaajal Pasupathi. They had two children together but in a few years they were separated. The couple divorced stating the reason of compatibility issues and dominating nature. Later on he started dating another girl from his academy, Dorathy Sylvia. Finally on 20th August, 2017 he was married to her and now they are blessed to have a baby girl named Tasha. 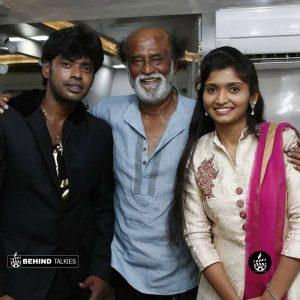 The Best Phase in Sandy’s Life

In one of the interviews Sandy said that the best phase in his life was the time when he worked with the legend Rajnikanth for the movie kaala. It was a dream come true moment for his as he always prayed for just one opportunity to work with the person he admires the most. He also got his car signed by Rajnikanth. Currently he is enjoying his stay at the Bigg Boss house and entertaining the fans as well.