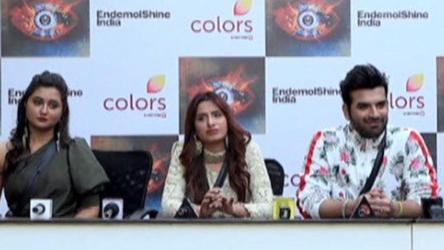 Big Boss 13 has been in the news for the last four months for all the right reasons mainly the right dosage of entertainment. The show is one of the top three shows of television and the audience keep trending their favorites constantly.

Rightly termed this week as the Badshah, it is obvious that Siddharth is the strongest contestant in the house. He has a massive fan following and his fans are always trending him to keep him in the limelight. Siddharth’s aggression was very popular considering Asim Riaz’ s behavior towards him. Asim has always instigated and provoked and Siddharth has said some nasty things in return. But Siddharth seems to be the only contestant who has shown every side of his personality to the audience. Last week when the connections entered the house and during a task Siddharth’s connection Vikas Gupta robbed the opposite team’s money, Siddharth made sure to take a stand and informed Big Boss that is Vikas was wrong then he and Vikas should be removed from the task. This sincerity is what is winning hearts and making Siddharth most popular.


Press Conference Could Bring About Changes in Shehnaz Gill?

Punjab ki Katrina, Shehnaz Gill is a natural entertainer but as pointed out by the press she can be very irritating at times. She might consider flipping a talent but in reality it means the person doesn’t have their own backbone. This is very apt in the case of Shehnaz who moves in the direction which she sees profitable. This kind of behaviour is not appreciated by her fellow contestants but Shehnaz finds this to be entertainment.

‘I am famous’ Claims Asim Riaz – Fans Agree With Their Twitter Army!

Asim Riaz seems to have got his popularity to his head. Ever since he was told that he has a fan base now he thinks no end of himself during the press conference he openly said that because he is famous now many girls might say they are his girlfriends. His attitude has gone worse since the beginning of the show and it is clear that he has no talent other than aggression. But his fans are crazy about the fact that Asim was an unknown figure earlier and built his way up with Big Boss.

The best game is currently played by Rashami Desai. Without doing anything she has managed to reach the top five. Rashami has always tried to show a sweet front and played behind everyone. If not for fighting with Siddharth she would not have been seen in the show. Rashami constantly played the woman victim card to get where she is. She has not been an active part of any task and even in the last week she did not seem keen to win the captaincy task. She shot to fame with her controversy with Arhaan Khan. And this continued over the last weekend. Apparently Rashami was not even aware that her boyfriend was previously married and even had a child. We don’t know if this is true but it has surely helped her gain alot of sympathy and hence popularity.

The best part about Arti is that she is who she is and mainly she is all heart. The way she plays itself shows that she wants love more than anything. Arti has always had her priorities set and her loyalties in place. In the last task she was very clear that if she did not become the captain then she wanted Siddharth to become. Whatever people may say about Arti but she has truly risen from the ashes and it can be seen evidently.

Will the infamous Paras-Mahira friendship end?

It is reported that this week Mahira Sharma will be eliminated. It has been pretty evident that Paras and Mahira have no game besides each other. They both lost the plot long back and are on the show based on their connection. It will be interesting to see if Paras finally bucks up post Mahira’s exit or remains the same.