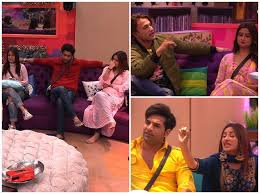 Big Boss 13 has entered its eighteenth week and the controversial house has remained in the limelight with its fascinating contestants. The house of chaos, drama, laughs and tears has ruled the TRP charts. The past week has seen equations being changed, personalities being challenged and fights galore.


Will Fighting and Violence Gain ‘Footage’?

Last week saw Sidharth and Asim take fighting to a whole new level. Asim was being an unfair sanchalak and on being called out he began an unnecessary fight. Sidharth insulted Asim’s father and brother which did not go down well. As always the fight was stretched but for the first time viewers saw Sidharth having a breakdown. Being the most popular contestants this season the question still stands; is their violence gaining them popularity? This seems a great way to gain the much needed footage and the contestants seem to understand that.

Shenaaz is well aware how she wants to play and with whom she needs to be to gain the necessary screen space that she wants per episode. She stuck by Sidharth’s side till she could squeeze out what she required and when she realized she had irked him she swiftly shifted sides. This created more drama as it was visible that she has no respect for friendships and stamps on people’s backs to go ahead. This was given a lot of coverage and owning to child-like behavior she seems to be climbing the ladder of popularity.

The Paras that was seen during the initial weeks seems to have disappeared over time. The only time he is seen is when he is being romantic with Mahira or taking up for Mahira. His game seems to have extinguished over time and he is only there to maintain a relationship with Mahira. It is only a matter of time until he is evicted since he seems to be contributing zilch to the game. Paras has fallen into the bottom three which makes his eviction confirmed over the next few weeks. His falling popularity will not be of much help to his current situation.

Mahira and Shehnaaz never got along with each other despite Mahira’s repeated attempts to maintain the friendship. Shehnaaz does not seem to understand what is it to be a friend. Shenaaz flips according to her convenience and leaves everything behind in hope of it being the same as and when she wishes to return. After Shehnaaz have a meltdown on Weekend Ka Vaar, it was only Mahira who consoled her. Mahira took it upon herself to be there for her friend but this was beyond Shehnaaz. She flipped yet again during the captaincy task and this did not go down well with Mahira. But considering Shehnaaz’s popularity, being at loggerheads with her won’t help Mahira’s fame.

Arti or Vishal: The Less Popular!

With Arti and Vishal both being nominated this week it is a close call as to who will be saved. Both have come a long way from being in the bottom two to being saved consistently. Considering this time they are in a fight against the best players in the house it depends wholly on their contribution this week.