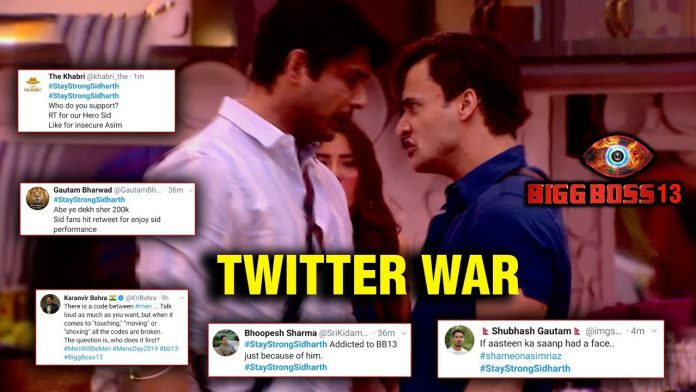 The house of Big Boss 13 has been in the limelight for its violent fight and aggression being pushed around casually. After a week of fun and emotion in the air this week returns with yet another fight. The house has turned into war zone yet again. The two most popular housemates Sidharth Shukla and Asim Riaz are yet again at each others throats. This is the first time after a fight that viewers have seen Sidharth Shukla break down. Fans have blasted the internet and are taking things into their own hands to fight against the GEC for using the actor as bait to gain more TRP.

Last night the viewers and housemates saw yet another showdown between the two strongest contender Sidharth Shukla and Asim Riaz. The two were seen locking horns during a task. Since Asim was the winner of the Elite Club last week he was monitoring the task during yesterday’s episode. In the task the housemates had to sit on a horse in the garden area and whoever stepped down from the horse would be disqualified from the task. During this time Vishal Aditya Singh got off from the horse and he quickly sat back to cover his tracks. Unfortunately, this was noticed the housemates. Sidharth took the leap and informed Asim about the same.

Asim chose to ignore it considering that Vishal is a part of his group. This made Sidharth loose his calm. This eventually led to a nasty fight between the two. They called each other nasty things and even went on one another’s families. It was seen that they even push one another but it was seen that Asim was the one to push. During the scuffle, the housemates and Big Boss had to intervene to bring it to a halt. Post which viewers saw Sidharth in conversation with Hina Khan who was in the house for the final round of the task. He was then crying in the confession room fed up of all the taunting and instigating that has happened during the last four months. Sidharth finally had a meltdown. He even wanted to quit the show and this is the first time he has ever mentioned it. Some are questioning Sidharth’s genuinity during this episode but a man who has never uttered the words that he wants to quit the show and has constantly been targeted by the other contestants in order to been seen on screen will eventually have a meltdown. People tend to forget he is human as well.

This did not go down well with his fans. They took the matter into their own hands and slammed the GEC for being unfair towards Sidharth. They are clearly using him to garner more TRP. His fans began with the hashtag #StopUsingSidForTRP in their tweets.

In their tweets people are brazen about their feelings. They have been commenting that If @BiggBoss let this overhyped hate monger Chuslet be a finalist @ColorsTV will be disrespecting own show!

If @BiggBoss let this overhyped hatemonger Chuslet be a finalist @ColorsTV will be disrespecting own show!
Task:0
Entertainment:0
Fights with logic:0
Logical stands:0
Content:0
Gratitude for show:0
Bhokna, Poke,Instigation:100%#StopUsingSidForTRP

They have even written It is actually @BiggBoss unfairness that precipitated #SidharthShukla to opt to quit. Agar Judge hi unfair ho toh.. NO HOPE FOR JUSTICE. NO POINT TO STAY!! Its not haar its SELF RESPECT !!

It is actually @BiggBoss unfairness that precipitated #SidharthShukla to opt to quit.

Its not haar its SELF RESPECT !!#StopUsingSidForTRP #BB13

On the other side they have also picked a bone with Asim for using filthy language in the show. Asim’s fans are also flooding social media and trending with #JusticeForAsim. It doesn’t look like the social media war is going to end soon.