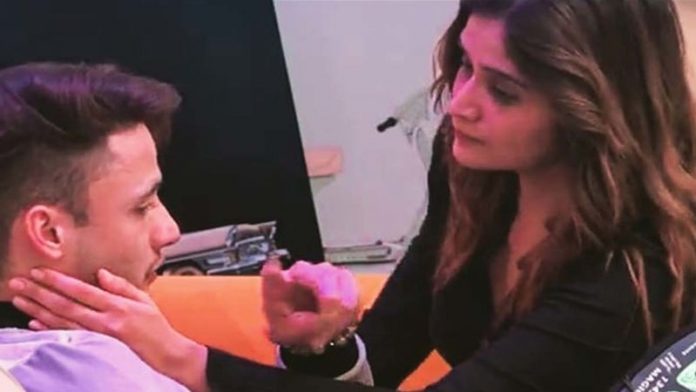 Big Boss 13 is highlighted only because of arguments and fights. Each and every contestant gets involved in fights. These fights are unnecessary for no reason. The contestants are expert in blowing a small issue into a big one.

One such incident happened in yesterday’s episode where Arti Singh and Asim Riaz were involved in an argument. Both of them were shouting at the top of their voices to prove their point. An unseen dekha video has surfaced on the internet where we can see how Arti is seen consoling Asim. They were sitting in the living room and were brushing differences.

Differences broke out when Siddharth taunted Asim as a ‘cry baby’ during the ongoing task. Asim kept quiet for some-time but after sometime, he couldn’t take it and gave it back to Siddharth. All the other contestants are fed up of their constant banter, so Arti had to take a step ahead to make them quiet. The focus overall shifted on Arti and Asim as they both engaged in a war of words, where Arti’s main motive was to stop them from fighting and abusing each other.

Asim who is currently on radar for being aggressive and constantly involved in fights. He was also bashed by host Salman Khan for his behavior. In the video, Arti is seen consoling Asim. She is telling him to control himself and not react if anyone provokes him. He is a strong contender and should main a good conduct in the house. She also mentions that his rude and aggressive actions won’t be liked by his family. Asim, where in is seen crying and is complaining that people just notice his behavior and don’t mention about other housemates’ behavior.

Arti tells him that host Salman Khan wants all the contestants to treat it as a day’s work and move forward. Don’t keep any grudges for the same. It is good to see that Arti being a sensible person in this case, came up and sorted out the differences. Follow Big Boss 13 on Colours to get more updates.