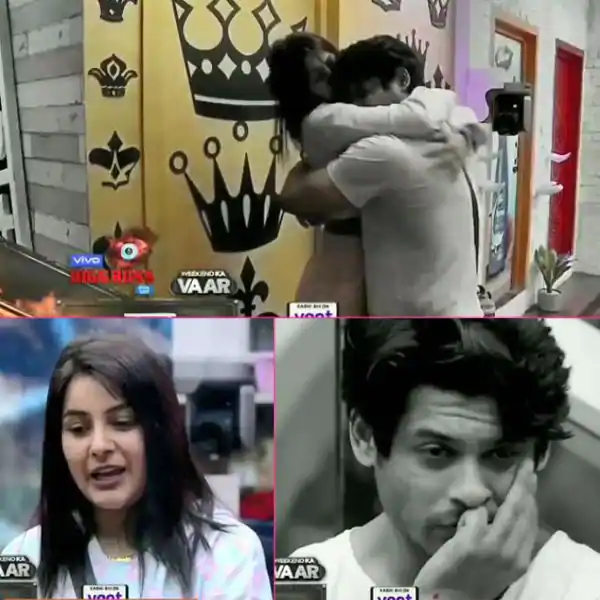 Today’s episode began with everyone waking up to the song Palat. Arti and Shehnaaz fool with one another in the new set up which is placed in the garden area. Arti asks her how her children are and her husband Sidharth. Shehnaaz says he has gone to work and is now a robber. To which Arti replies that he first stole your heart and now he steals for a living. Shehnaaz says he will want to divorce her after a month but she won’t let him.


Shefali tells Asim that she wants to put ghee on his roti with all the love that she possesses for him. Asim tells her to put ghee and not go back on her statement. Shefali assures him that she will make this sacrifice for him. Asim get irritated and says not to make anything for him and to keep dough he will make for himself. Shehnaaz troubles Shefali and says make rotis for us also with ghee to which she replies that this love is only for Asim as he is my friend. Mahira is putting words into Shefali’s mouth to which Asim questions. Rashami tells him to ignore them. Shefali makes a roti in the shape of a heart and keeps it in the bedroom before Asim. He tells her to keep the rotis in the hot-case but she is adamant. He tells her not to take his name as he was only talking to her because it was her duty to prepare rotis.

Rashami asks Paras to make tea but he says that he has fever cannot make it. Mahira intervenes and says Paras will not do any work today since he isn’t well. Rashami asks Arti to make tea for her, Arti says she will once she is done preparing the food. Rashami irritates her and taunts her that tea needs no preparation. Arti tells her to stop sleeping and get up to make her own tea.

Rashami tells Vishal to make tea for her since she is asking him for the first time. She tells him to make three cups. He refuses to make for Madhurima and Asim but gets up to make for Rashami. Asim says not to make. Madhurima intervenes and says that it is better Asim takes a stand for Vishal since he never takes for himself. She calls him ‘behenji’ and this irritates him. He throws water on her. She returns the favor. Big Boss warns them not to throw water on each other since the mics will get spoilt. They do not listen and continue to throw water. Big Boss warns them again. Vishal asks her who started this fight with the taunts and says she showed her status. She comes back in a rage and hits hit with a frying pan. The intensity of the rage is so much that the pan gets dented and bent.

Rashami comes in the middle and takes Madhurima out of there. They enter the washroom and Shehnaaz pokes into the matter by talking against Vishal. Rashami tells her not to simply talk without any reason.

Paras show Sidharth the frying pan. Sidharth comments that he went to the washroom for five minutes and so much happened. Sidharth adds to the comic element of the situation. He asks Vishal what happened genuinely. Sidharth asks Madhurima if she got hurt and Rashami replies that she didn’t. Sidharth wonders if Rashami has become Madhurima’s mouthpiece. Asim tells Madhurima to say sorry and get done with the whole situation but she refuses to say the same. All the boys sit together and discuss what happened. Paras tells Vishal that what happened today was not right and he should take a stand for himself. Sidharth asks them to relieve the situation since he was not present. Rashami tells him to come she will be Madhurima and hit him so that he can actually feel what happened in real.

Rashami and Vishal sit on the sofa. Sidharth asks Vishal how he is doing now. Rashami questions why he is so concerned and whether typhoid shook his entire brain. Rashami screams for Vishal saying not to trouble him with the events. Sidharth and Shehnaaz wonder what is happening and walk away. Later on Sidharth and Vishal sit together on the sofa, Rashami comes to give Vishal tea and Sidharth asks for some as well. She gives him tea and on questioned she tells him there is no tea left but he should drink this. He follows her to the washroom and gives her the tea and tells her to have since there is no more.
Everyone is in the bedroom as preparations for the task continue. Vishal and Madhurima begin yelling at one another. The insults are pouring in and Madhurima yells that the problem is tat he never loved her. They are separated from one another. Shehnaaz is the only one who is taking Madhurima’s side. Rashami yells at Shehnaaz for giving her opinion unnecessarily. Vishal tells Madhurima that he made her and she was nothing without him.

Big Boss calls everyone into the living room and says that Vishal and Madhurima were given an option to leave the house if they cannot live together. The last time they were asked if this was a personal matter but Vishal made it clear that it wasn’t. But today the way Vishal instigated Madhurima and threw water on her despite warnings from Madhurima and Big Boss was wrong. Violence is not appreciated in the house and what Madhurima did was also not acceptable. They will both get a punishment over the weekend until then they will be locked in jails and allowed outside only if they wish to use the washroom. Rashami would be the jail keeper. Madhurima is locked in but Vishal refuses to enter the jail and says that he will quit the show. Arti says that this is become his usual thing where he threatens to leave but never does. Madhurima throws a fit that she shouldn’t be locked in alone. Even Vishal should take on his punishment.

Big Boss calls everyone in the living room again. He asks Vishal what his final decision is. Vishal says that he wants to leave the show. Big Boss says that if he leaves then it will be a voluntary exit. Asim and Rashami manage to convince Vishal to not leave the house. Vishal in rage throws his bottle. He questions that if a woman attacks a man then there are no consequences but if a man attacks a woman then all hell breaks loose.

The first bell rings and Arti’s brother Krushna enters. Arti cannot control her excitement and runs towards him. She hugs him and cries. He tells her how proud he is of her and the fact that she survived for four months in the house. His proudest moment was when he was recognized as Arti’s brother. Arti’s nephews also enter the house and she is on top of the world. They meet all the housemates and a feeling of happiness spreads.

The episode ends with Sidharth joking with Madhurima about her episode with Vishal. He says in jest that only thing left for them is to spit on each other. Vishal takes this seriously and says that he will not spit on shit. The argument between Madhurima and Vishal intensifies as the episode concludes.

Precap: Sidharth mother comes into the house and he is beyond happy to meet her. He hugs her and they sit down to talk. She tells him that when he smiles their whole house smile. He should be happy and wear full pants. She even meets Rashami and pats her. Shehnaaz’s father will also enter the house and tell her that he wants to see the trophy in her hand and her relationship with Sidharth should end in the house itself. Shefali’s husband makes it a point to meet Asim especially and says that he will turn on anyone who speaks wrong about his wife.