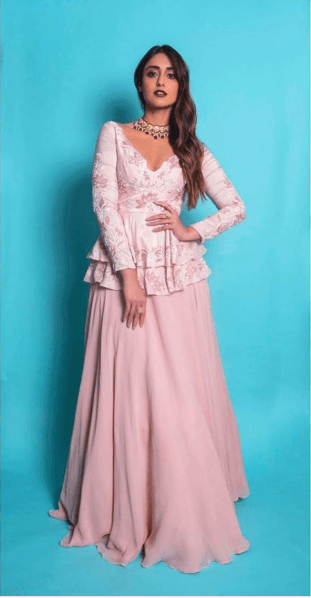 Actress Ileana D’cruz recently visited Mukesh-Neeta Ambani’s house to celebrate Ganesh Chaturthi, a video of which has surfaced in social media. In the video, Ileana D’cruz reached the festival with a very beautiful style. In this shared video, Ileana Dikruz looks very happy and lovely. In the festival, Ileana was wearing a pink crop top and ghagra with an Indo-Western look. Overall, Ileana D’Cruz looked very beautiful and charming in this look.


A lot of likes and comments have come on the video so far. Fans are also praising this beautiful look of Ileana D’cruz. Ileana D’Cruz is currently staying away from the film world. She was last seen in Ajay Devgan’s film Red. Ileana D’cruz’s performance in the film and the film was well received and appreciated. Ileana started her acting career in South with Tamil and Telugu films.


All her hits were proved in the South. Ileana was also honoured with the Filmfare Award for Best Female Debut – South for her unmatched performance in the Telugu film Devadasu. At the same time, Ileana made her debut in Bollywood with Ranbir Kapoor’s film Barfi, after which she has appeared in many hit films like Rustom, Badshaho. Currently, Ileana is busy shooting for the multi-starrer Pagalpanti these days. Apart from her in this film, John Abraham, Anil Kapoor, Urvashi Rautela and Arshad Warsi will be seen in the lead roles.

This film will be released in November 2019. Apart from this, Ileana D’cruz has remained in many churches after her breakup. It is being told that Ileana and Andrew Kneebone have had a breakup, both have also unfollowed each other on Instagram. It’s known that Ileana has been dating Andrew for the past many years. Not only this, the actress has always been open about her relationship. Ileana keeps sharing photos and videos with her boyfriend on social media too.