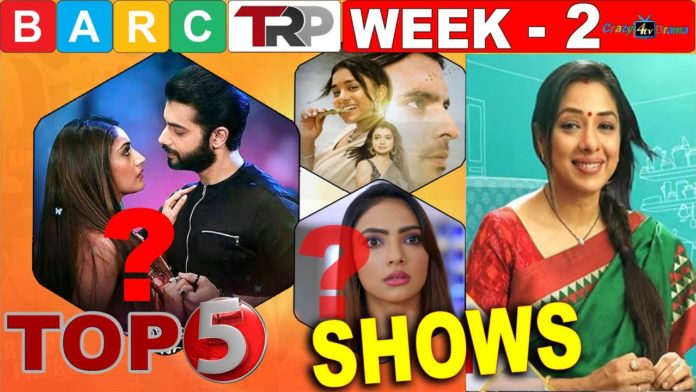 BARC India has reached its 54th-week TRP rating; this is the 2nd-week report of 2021. Once again, the show Anupama (Anupama), which has been consistently on top in this list, retains its first number. At the same time, Ekta Kapoor’s show ‘Kundali Bhagya’ and tamarind has been changed. SAB TV show ‘Taarak Mehta Ka Ooltah Chashma’ once again entered the top 5. Here is the list of the top 5

1. Anupama
‘Anupama’ is again at number one in the TRP list. ‘Anupama’ shows Rupali Ganguly, Sudhanshu Pandey, and Madalsa Sharma in lead roles. According to the track released, Vanraj tells his heart to Anupama and tells her that he now wants to be with his family and her. But Anupama refuses. After which, Vanraj goes to Kavya. The upcoming episode is going to be even more interesting.

2. Imli
This show of Star Plus ‘Imli’ has replaced ‘Kundali Bhagya.’ Like last week, this time also the show is in second place. The show is getting a lot of love from the audience. According to the released track, Imli and Aditya are coming to the village. Aditya decides to leave Imli in the village and go to Delhi. Meanwhile, tamarind gets shot. Next week, the full-on drama Dekhen is scheduled to meet.

3. Ghum Hai Kisikey Pyaar Mein
Star Plus’ show ‘Ghum Hai Kisikey Pyaar Mein’ has moved from the fourth position to the third position. The show stars Neil Bhatt, Ayesha Singh, and Aishwarya Sharma in lead roles. According to the track released, Say is not taking the name of the end. Family members, one after the other, cause new troubles. Pakhi does not like to Say at all; she keeps trying to humiliate him in front of everyone.

4. Kundali Bhagya
Shraddha Arya and Dheeraj Dhupar starrer ‘Kundali Bhagya’ has dropped from third place to fourth position this time. It seems that people do not like this show anymore; because of this, it is continuously coming from top to bottom. Preeta is making new plans to remove the curtain from Akshay’s secret, according to the released track. Here, Akshay is also no less, and he is also preparing to beat Preeta.