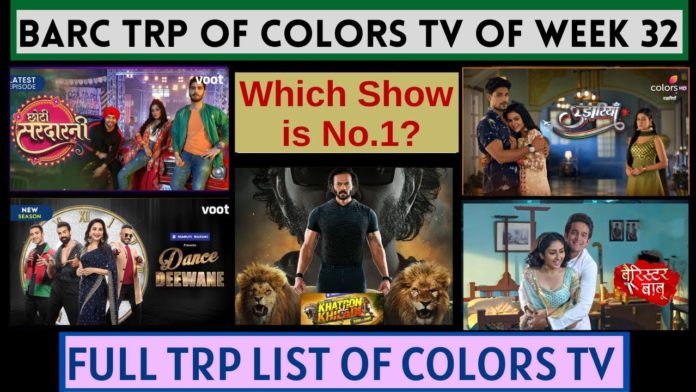 The TRP list of the 32nd week of TV shows and serials has come out. Today BARC India (Broadcast Audience Research Council) has released the TRP list. In which the shocking TRP rating of Indian Idol is being seen. Reality shows are now giving competition to Saas-Bahu serials. These shows are successful in winning the hearts of the audience. Know which television shows got success and which did not take this week in BARC’s weekly TRP report.

Top 5 in TRP Ratings for Week 31:
Anupama is ruling the TRP chart even in the 32nd week. It is one of the most popular television shows. Rupali Ganguly and Sudhanshu Pandey starrer Anupama Show have continuously kept the audience hooked on the screen with its story. Currently, Kinjal’s revenge drama is being shown in the story. Along with her family, she shows a lesson to the company’s boss Dholakia who molested Kinjal. This week also got first place in the report of Broadcast Audience Research Council (BARC).

The serial Gum Hai Kisi Ke Pyaar Mein also occupies second place in the TRP list as usual. As usual, there has been a lot of uproar in the TRP list of Samrat’s return. While Pakhi and Samrat are about to get divorced, Sai and Virat’s relationship is also on the verge of breaking. Now, after knowing the truth, Sai also does not want to be in this relationship. In the 32nd week, the serial has again secured the second position.

There are slight fluctuations in the ratings of Imlie serial. This week, the Imlie serial has jumped from third to fourth in the BARC TRP rating list as Malini is currently in between Imlie and Aditya’s love story. The twist coming in the story is winning everyone’s heart. Imlie is constantly trying to bring Malini’s real face in front of Aditya.

There is no change in the TRP position of Khatron Ke Khiladi Season 11. This week also the show is at number 5. In Rohit Shetty’s TV show, the audience is constantly watching the celebs performing dangerous stunts. Divyanka Tripathi, Shweta Tiwari, Arjun Bijlani, and Vishal Aditya Singh are seen performing daring stunts in the TV show.