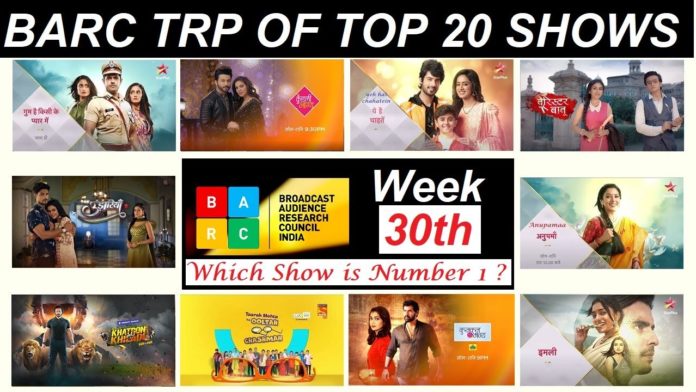 BARC TRP report for week 30 has arrived, and it’s a shock for Indian Idol fans. With only just two weeks remaining for the Indian Idol 12 finale, the ratings have dropped mainly because there was no elimination for the past few weeks in the show. With Top 6 contestants, it’s going to need two good weeks to pull up the ratings.

Viewers are desperate to know which show has won. This week also Rupali Ganguly and Sudhanshu Pandey’s show Anupama is on top. At the same time, there has been a jump in the ratings of reality shows Khatron Ke Khiladi 11 and Indian Idol. Check out the TRP list here

Anupama
Rupali Ganguly, Sudhanshu Pandey, and Madalsa Sharma’s show Anupama remain on top this week as well. A new twist is coming into the story. Now Kinjal is going to get a big setback in the show. A new girl is about to enter Paritosh’s life, about which the Shah family will soon come to know. The show has got 4 million impressions. Anupama has broken all records.

Ghum Hai Kisikey Pyaar Meiin
In the 30th week, Neil Bhatt, Ayesha Singh, and Aishwarya Sharma’s serial ‘Gum Hai Kisi Ke Pyaar Mein’ are at number two. Fans are liking the closeness of Sai and Virat. At the same time, shocking twists are ready to come to the show. Last week the show got 3.1 million impressions, while this week, it got 3.3 million impressions.

Imlie
The show of Sumbul Tauqeer Khan and Mahajani has been showing its presence in the TRP list for some time now. Tamarind has rescued Aditya from the clutches of kidnappers. At the same time, Malini has told her mother that there was no person named Kunal in her life. A big twist is ready to come in the upcoming episodes. Tamarind has garnered 2.9 million impressions.

Indian Idol 12
As we are getting closer to the finale, the singing reality show is getting great viewership across the country. The show now features Pawandeep Rajan, Arunita Kanjilal, Sayli Kambli, Nihal Taro, and Mohammad Danish. Fans are curious to know who will be the winner of the show. Like last week, this time too, Indian Idol 12 has got 27 lakh impressions.

Yeh Hai Chahatein
The spin-off of the popular serial Yeh Hai Mohabbatein starring Abrar Qazi and Sargun Kaur Luthra in lead roles has been on the top for the past few weeks. The lead’s chemistry and interesting plot have managed to keep the audience hooked. The show has got 2.6 million impressions this week.