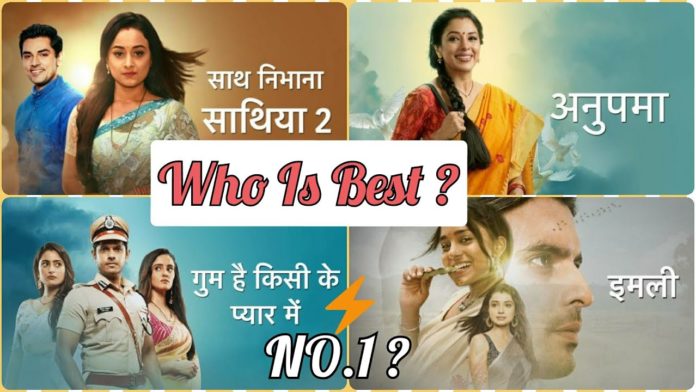 BARC India’s 21st-week TRP report has been released. After a wait of three weeks, Star Plus show Anupama made a spectacular comeback at No. 1. Thanks to the track of Vanraj’s wedding, both Anupama’s lost voice and the TRP of the show are back. Talking about the top 5 serials of this week, ‘Saath Nibhana Saathiya 2’ was out of the TRP list after a long time.

Despite Madhuri Dixit’s comeback, the TRP of ‘Dance Deewane’ has once again fallen. ‘Kundali Bhagya’ and ‘Kumkum Bhagya’ also have a bad situation in TRP. So let’s take a look at some of the shows that managed to make their way into the top 5 this week.

Anupama
This week’s TRP 3.3 of Star Plus show Anupama has come. The wedding track of Vanraj and Kavya is currently going on in the show. On the day of his own marriage, Vanraj has disappeared from the pavilion. Kavya feels that Anupama is behind Vanraj’s disappearance in this way. So she threatens to file a complaint against Anupama and the entire Shah family at the police station. Anupama gets angry on hearing Kavya’s threat. Whether Kavya’s ‘V’ means Vanraj will reach the wedding pavilion or will Kavya be left alone once, it will be interesting to see.

Ghum Hai Kisi Ke Pyar Mein
Once again missing from the first number, Ghum Hai Kisi Ke Pyar Mein has come to the second number. This week the show’s TRP 3.2 has come. Due to a decrease of 0.1 point from last week’s TRP, the show has reached second place. Currently, Sai wants to introduce her husband Virat to Pakhi in this show. Aaj Kal audiences who like the love triangle on TV are not liking the track of a wife introducing her husband to her love in this way. So maybe the rating of this show has dropped.

Imli and Indian Idol 12
The TV serial Imli, who dreamed of leaving Anupama behind with a TRP of 3.1 last week, has suffered a major setback this week. This week the TRP of tamarind has gone straight to 2.9, falling by 0.3 points. Due to this, the show has come from number 2 to number 3. Currently, in this show, Aditya is caught between two women who have come into his life. Tamarind on one side and Malini on the other.

It's a tough choice between love & sisterhood! But what are you looking forward to the most? Let us know in the comments below.#Imlie, Somvaar se Shanivaar, raat 8:30 baje, StarPlus aur kabhi bhi Disney+ Hotstar par: https://t.co/WYCtR9qp7A@TouqeerSumbul @Gashmeer pic.twitter.com/kWVq8ARYa1

Talking about Indian Idol 12, once a week, there is a good increase in the TRP of Indian Idol 12. After last week’s 2.3, Idol’s TRP has achieved a straight increase of 0.6 this week. From the fifth position, now the show has jumped straight to number 3. Now in the coming weeks, the challenge of maintaining this TRP will be in front of the team of Indian Idol.

Super Dancer Chapter 4
Like last week, this week also Super Dancer 4 remains in fourth place, but this time the TRP of the show has gone up from 2.4 to 2.6. After Shilpa Shetty’s return, it is expected that this dancing reality show will do wonders on the TRP charts.