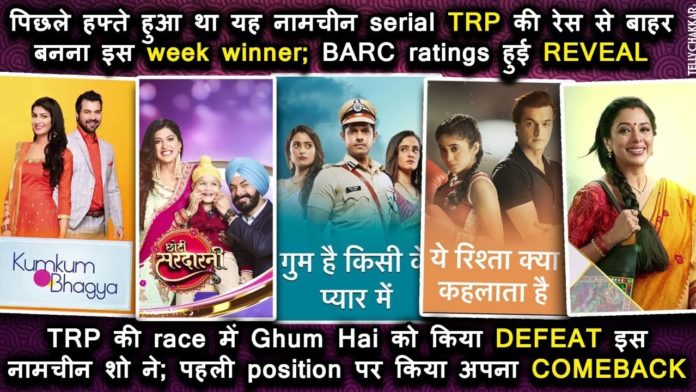 Broadcast Audience Research Council (BARC) has again ranked first on the 20th week TRP list of the TV show ‘Gum hai Kisi ki Pyar Mein.’ ‘Saath Nibhana Saathiya’ has got a place in the top 5. The official report of which show was liked more by the audience in the Corona era and not from the Broadcast Audience Research Council (BARC) TRP list. This time in the 20th-week report, Family Shows once again won. Reality shows and comedy shows have lagged behind family shows. However, the show ‘Ghum Hai Kisikey Pyaar Mein,’ which was number one last week, has once again retained its place.

2. Anupama – Rupali Ganguly’s popular TV show ‘Anupama’ used to do number one night back. But now the show is getting tough competition from ‘Ghum Hai Kisikey Pyaar Mein.’ Suppose the audience believes that prolonging the divorce sequence in ‘Anupama’ is the reason behind it. This week also the show is in second place.

3. Imli – This week, the Star Plus show ‘Imli’ has been named in third place. Love triangles are also seen in Sumbul Tauqir Khan starrer ‘Imli.’ The show has retained its position.

5. Taarak Mehta Ka Ooltah Chashma – The shooting of SAB TV’s comedy show ‘Taarak Mehta Ka Ooltah Chasma is currently out of Mumbai. Viewers like the sting operation based on Popatlal. The show got a place in the top 5. The show was in fourth place last week. In this way, it has lost one notch. Indian Idol has not found a place in the top 5 this time.