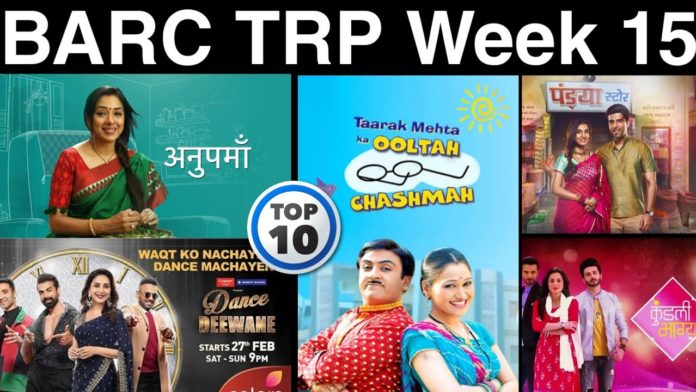 BARC India has released the TRP of the 15th week TV shows. For the past several weeks, Rupali Ganguly’s show ‘Anupama’ has occupied the first position in the TRP chart. This week too Anupama is in the first place, but this week the rating has decreased. This situation is about the unique show and has seen a decrease in the TRP rating of other TV shows. The reason behind this is the Indian Premier League (IPL). IPL matches are being played at 7 pm, which is the running time of TV shows.

In such a situation, the people’s attention has diverted to the IPL from the TV shows. Now you must be thinking that most domestic women watch TV shows; how did the IPL hit them. So let us tell you that there are more poor and middle-class families in our country. Most of these houses will be such, where there will be only one TV. In such a time when it is time for daily soap to run, then it is also the time of IPL. In such a situation, only one show can be seen at a time, and its effect can be said that the TRP of the TV show has been affected.

1. Anupama
Well, it has happened to hit the IPL that falls on TV shows. Now let’s talk about which shows have been at the top this week and how much ratings of these shows have come. Last week the TRP of the Anupam show was 3.7, but this week the show has come down with a bang. The TRP 3.0 of the show has arrived this week. With this rating, the show still occupies the number 1 spot in the top 5.

4. Ye Rishta Kya Kehlata Hain / Kundali Bhagya
Ye Rishta Kya Kehlata Hain and Kundali Bhagya had achieved the fourth position like last time? The TRP of both these shows has been 2.1 this week. In Kundali Bhagya these days, the same drama is going on, which was going on earlier. Preeta is still in jail and is doing everything possible to get herself out. At the same time, if we talk about a relationship, then Seerat is trying to meet her love, but every step of her fails.