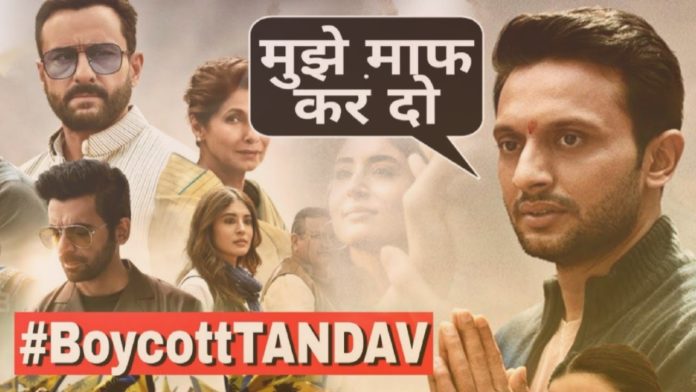 Amazon Prime Video landed into trouble in the Indian waters, thanks to the release of ‘Tandav’ on the 15th of January 2021. Starring Saif Ali Khan, Dimple Kapadia and Sunil Grover in prominent roles, ‘Tandav’ showcases the dirt behind the hunger for power in Indian politics.

However, ‘Tandav’ received some blatant disgust for portraying the ‘Hindu Lord Shiva’ in a controversial scene. Apparently, the scene is a skit in a fictional college ‘VNU’ (resembling JNU, Delhi). However, the scene is provocative and is derogatory as it hurts Hindu sentiments. The guy who plays the role of Shiva in the skit voices out blunt remarks and another guy plays the role of ‘Naradh’.

Several Hindus and entertainment enthusiasts were disappointed with the portrayal of Lord Shiva in such roles. However, this is the harsh reality of the threat against Hindus on OTT platforms. Earlier, Netflix and Zee5 were also in trouble for telecasting shows with Anti-Hindu sentiments.

Twitter was flooded with cries to ‘Ban Tandav’ and ‘Boycott Tandav’ as it hurts Hindu sentiments. However, the OTT platform and the makers of the show are yet to comment on the recent developments. The writer of ‘Tandav’ claimed he was not allowed on the sets of ‘Tandav’ and the producers kept him away. He also claimed the original script did not have such scenes.

The call for regulating the OTT platform content intensifies as ‘Tandav’ is yet another example of blind hatred against the Hindus and a desperate measure to spread ‘Right wing/Hindu phobia’.

If somebody had made such a series on their gods, the matter would have reached in the parliament and top courts of the country.

Hindus are not taken seriously because they don't block roads, they obey the laws. That's it. Don't test our patience.#BanTandav #BanTandavNow pic.twitter.com/5nJJvQyhy6

To @PrakashJavdekar ji, Sunder request to #BanTandavNow as it is a clear attempt to create divide in the society. https://t.co/yLOgRD5orI