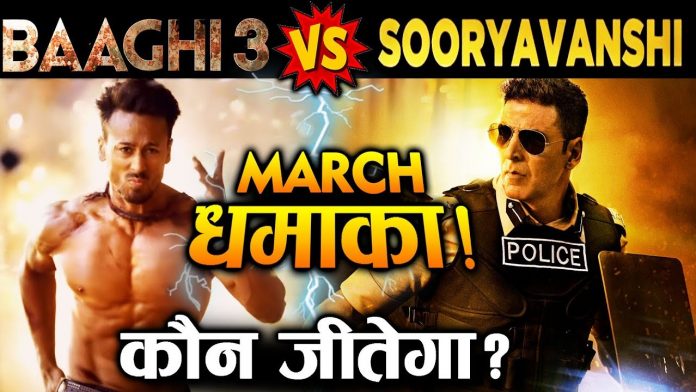 Bollywood is all set to witness a blockbuster March with movies releasing one after the other at a rapid pace. Each movie has an x-factor that will leave the audience gaping for more. March could be the highest gross selling month of the year if all goes well. This month expect the biggest stars of the industry carrying ahead a franchise.

Baaghi 2 is all set to release this Friday. It is one of the most awaited film of the year. It will release on the first weekend of the month. Baaghi 3 is most likely to kick off with massive collections. The Baaghi franchise is huge and Tiger Shroff is taking it ahead on his shoulders yet ahead. Tiger Shroff’s last release War was a huge hit and coming from that Baaghi 3 will surely attract loyalists and fans.

Taking ahead Rohit Shetty’s vision and cop universe is Sooryavanshi. The past installments of this franchise have been a huge hit among the audience. After having Ranveer Singh take the reins over from Ajay Devgn, this time around Rohit Shetty has brought in the big guns with Akshay Kumar taking the lead. Sooryavanshi will be the biggest release for Bollywood in this month. This is the fourth installment of the franchise.

The Rohit Shetty cop universe always breaks box office records and this film doesn’t look to be different. It brings together major megastars who rule the box office with cameo roles from Ajay Devgn and Ranveer Singh. The film is expected to earn around 60-75 crores on the first weekend. Coming from a strong foundation, Sooryavanshi can earn over Rs 300 crores at the box office.

March is going to be huge at the Box Office with major films releasing. These films are backed by huge stars who have had a good run at the box office. March could be the highest grossing month of 2020