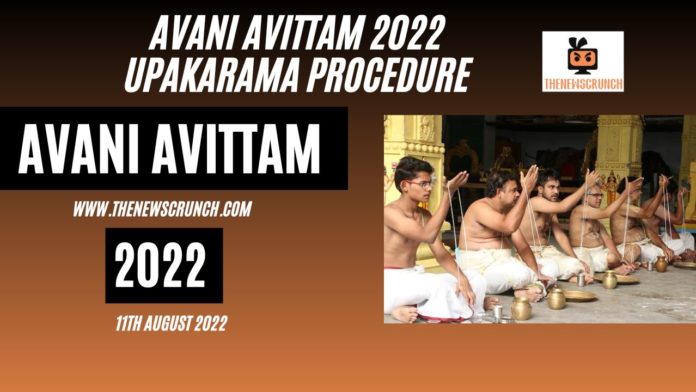 On the holy day of Avani Avittam, Brahmin lads will be bestowed with a holy thread (“poonal” in Tamil) which signifies the third eye for Brahmins (eye of wisdom, to be precise). Avani Avittam is celebrated as Janeyu Purnima in the Indian states of Orissa and Maharashtra. Following the day of Avani Avittam is the Gayathri Maha Mantra Japam day. However, this ritual varies according to sects.

Usually, Brahmins chant the powerful Gayathri Mantram 1008 times on the succeeding day of Avani Avittam. Gayathri Maha Mantrajapams will be chanted on 12th of August 2022 this year.

For Yajur Vedics, the rituals begin with a shower and getting dressed in a white dhoti (veshti) with stripes of white ash on their forehead ( if they are devotees of Lord Shiva). The rituals begin with ‘Mahasankalpam’ which is practically a call for compensation for the sins committed over the last year. It involves placing the right palm on the left palm which is placed on the right knee in a seated position.

A string of chants continues and the old thread called ‘Janeyu’ or ‘Yajnopavit’ or ‘Poonal’ is replaced with a new one.

Usually, Yagnopaveetam is performed in the midst of trained Brahmin priests in groups or among families. However, considering the current Covid-19 situation, the upakarma is performed with the assistance of online videos for Avani Avittam 2022 Upakarma.