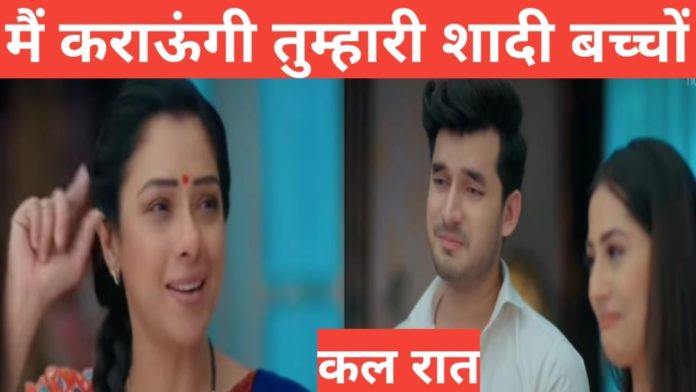 Anupama has become quite exciting these days. Anupama and Vanraj return home. Vanraj gets very angry seeing Samar and Nandini up close. He calls Samar bad. Anupama tries to handle her, but Vanraj hears one of hers.

In the coming episodes, it will be shown that Vanraj says that Samar and Nandini cannot have a relationship because she is Kavya’s sister. Anupama says that this relationship will happen because she is a brilliant and well-behaved girl. But Vanraj does not listen to her once again. Samar explains to Anupama that she only proposed Nandini.

Here Nandini keeps crying a lot, and she makes a plan to go from there. In Paritosh and Kinjal, there is a lot of fight over this matter. Paritosh also does not like this relationship, and Kinjal tells him that when we can have a relationship, then why not both of them. On this, Paritosh says that your mother has spoiled your mind.

Anupama stops Nandini from going and says that she is with them both. Anupama takes a promise from both of them that the mistake that Kinjal and Paritosh had made, they will not make that mistake. In the last episode, you saw that Summer and Nandini dance together, and Summer gives her a ring. Both are a little closed, and the whole family comes there at the same time. Vanraj gets very angry after seeing both of them like this. Summer tells Vanraj that you can speak what you want to say, but you cannot disarm my love.

Vanraj says that you cannot fight with me; if I slap you, the whole senses will come. Anupama explains enough to Vanraj. In the last episode, you saw that Naraj’s car goes bad, and everyone starts drinking tea. Summer calls Kinjal and asks her to come home late. He says that he is making some special plans for Nandini.