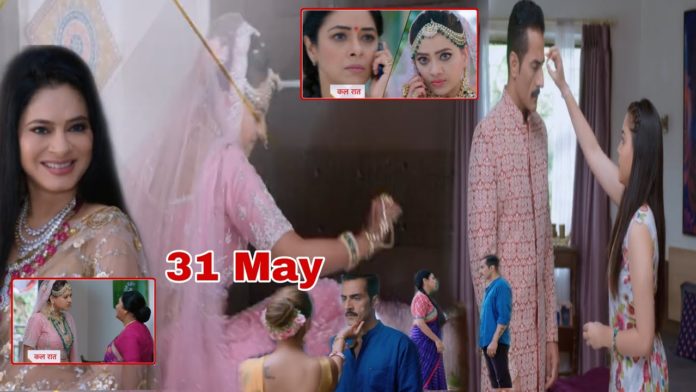 The track of Kavya and Vanraj’s wedding in the show ‘Anupama’ is very much liked by the audience. There is a strange madness in Kavya about marriage. Seeing which Vanraj is very upset. Will Vanraj really marry Kavya? Kavya has started preparing for her and Vanraj’s wedding. At the same time, she is not leaving any opportunity to humiliate Anupama too. At the same time, Vanraj is still not able to decide that he should also get married.

Vanraj and Kavya’s wedding track is going on in the show ‘Anupama’ these days. In Kavya, there is complete madness about marriage with Vanraj. At the same time, she is trying her best to make Anupama look inferior as well. In the last episode, we saw that Kavya herself applies turmeric and mehndi to herself. Know what will happen in today’s latest episode.

Kavya steeped in preparations
Kavya is completely disturbed by his antics. It is the same poem that they are completely immersed in wedding preparations. She also brings clothes for the rest of the family. Whom the whole family is sad and upset. Bau tells Kavya that they must come to the wedding.

Kavya got angry seeing Vanraj-Anupama
Vanraj goes to Anupama to speak her heart and tries to talk to her. Anupama does not like Vanraj’s arrival at all. She says that she should not come to him again and again. Vanraj explains to whom he should talk because no one understands him. Kavya sees Vanraj and Anupama talking. She is irate about seeing this.

Anupama left the marriage of Kavya-Vanraj
Troubled by Vanraj’s antics, Anupama decides that she will go somewhere far away until Vanraj and Kavya get married. Then she gets a call from Doctor Advaita, and she says that today she has got an appointment with a doctor. Can she come? Anupama is overjoyed to hear this. Kavya comes out of the house and starts showing her the look of her bride. Seeing which Anupama tells them that the thing which is of glass should not be seen much.