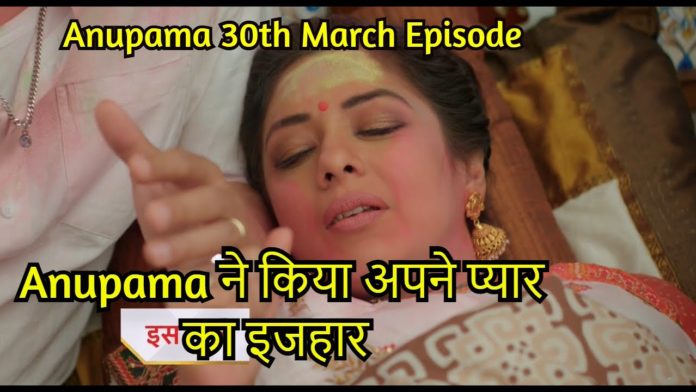 The track of Rajan Shahi’s show “Anupama” has become very interesting. Celebration of Holi is going on in the show. The entire Shah family is enjoying this festival. Every member wants Anupama to enjoy this Holi to its fullest because she has not celebrated this festival with her mind for the last 25 years. After all, Vanaraja is refrained from applying color. Kavya is also planning to offer Holi to Vanraj, but Pakhi wants to stop him from doing so.

Anupama accidentally drank a cannabis glass, and Anupama had a different style. She walks into Vanraj’s room and dances to the song “Hungama Ho Gaya” and even puts color on it. But Kavya sees all this and goes on in anger from there. Simultaneously, all people find Anupama, and she tells them that she is in Vanraj’s room.

The whole family finds Anupama in a state of intoxication. When Ba tries to calm her down, she tells him that she always wanted him to be her mother and not behave like a mother-in-law. She thanks Babuji on her behalf that she always supported him. She also tells them that summer is not her favorite but that summer understands her very well.
Kavya is still angry at what she saw, and when Nandini questions her why she went to Shah House, she slaps her. After this, she says that Vanraj’s divorce will be final; she will marry him.

In the upcoming episode, Anupama expresses her love for Vanraj. Along with Vanraj, everyone is surprised by Anupama’s heart-touching statements. Vanraj is left staring at Anupam. Will this change things between him and Vanraj? Will Vanraj start looking at her differently? And what will Vanraj say when Kavya asks him questions?