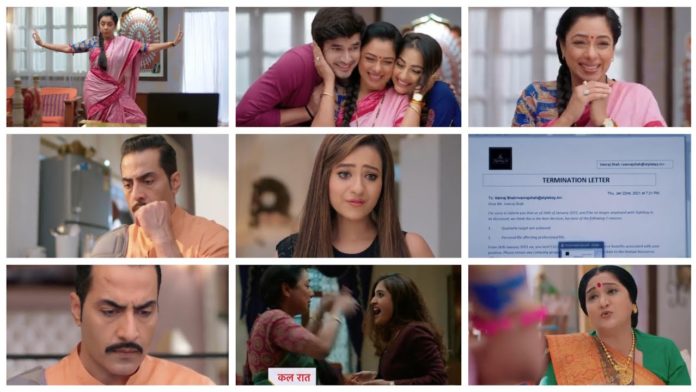 Serial Anupama is constantly ruling the hearts of people. The show also remains at number one in the TRP list. The show is getting a lot of love from the audience. According to today’s episode Tuesday 27th January 2021, Vanraj has once again left the whole family and has gone to Kavya. This time he has also taken Pakhi with him. Vanraj tells Kavya that Anupama has filed the divorce, Pakhi will be with her for a few days. Here Paritosh dismisses Anupama as the decision of Divorce.

Paritosh says that if she had taken care of her (Anupama) family, she would never have decided to divorce. Because of the people are talking. Summer fight has taken place. I was unfortunate to see him eating him. He says that Papa did wrong, but you should have understood, but Iago came to the fore. Summer flare-up after hearing this. He says understanding the mother, Pakhi is a child.

Paritosh tells Kinjal that his mother rightly said that we should stay in his farmhouse. But Kinjal refuses to accompany Paritosh. Summer repeatedly says that the mother has taken her own stand for the first time, but instead of supporting them, you persuade them that they have searched with Papa. Anupama loses her temper after listening to everyone’s words and tells everyone to keep quiet.

Anupama says that the decision I have taken does not take any woman of my age, so perhaps you all feel strange. But this is my right. I will bear the trouble that will come upon me. No one needs to be disturbed because of me. If anyone needs to leave the house, it is me. I leave this house is right I should have left the house the very day he (Vanraj) evicted me from the house. But Babuji refuses to let him go. Ba is angry with Babuji as to why he did not stop his son.

Babuji says that the sons of this country will not improve until the mother sees her mistake. Ba says that your decision will affect the children, the society will not let them live. Babuji says that whoever has trouble with my daughter can leave the house without Kinjal. They say that if she leaves the house, then I will also go with her. Ba then says she is wrong.

Here, the pain in Vanraj’s hand arises again. Vanraj asks Kavya whether she has not brought her medicine? She refuses, but Vanraj says that no matter what, he will get medicine from summer tomorrow. In the upcoming episode, you will see that, Vanraj has been removed from the job; here, Anupama gets 12 thousand rupees and end teaching dance to women. It will be interesting to see what will happen in the upcoming episodes.