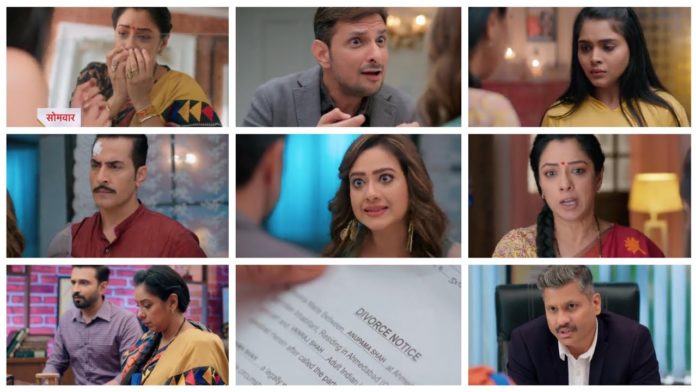 The serial ‘Anupama’ has also topped the TRP list this week. Its story is binding people. According to the track released, Vanraj wants Anupama to forget everything and come back to her. But Anupama refuses to do so. Vanraj gets into thinking. He remembers all the words of Kavya and Anupama. Vanraj goes to meet Kavya at her house, and she sees Anupama. The big twist is on the upcoming episode.

You have seen that Baa Anupama is rightly told that Vanraj has not come home yet; his health is bad, he should know. Suddenly Vanraj reaches home with Kavya. He declares in front of everyone that he will stay with Kavya now and will marry her soon. Vanraj feels that by doing this, he will teach Anupama a lesson. He says in front of Ba that he wanted to forget everything, but Anupama is not ready.

Kavya bags Vanraj. Seeing him, Anupama says that do not do the same to her as I did to her. In the upcoming episode, you will see that Anupama calls a lawyer and talks about divorce from Vanraj. Vanraj feels that Anupama can never divorce her. But he is surprised to see the divorce papers in the office. Here, Anirudh also demands money from Kavya and Vanraj.

Will Vanraj Anupama get divorced? Will Vanraj marry Kavya? This will be known only in the coming episodes. You saw that Kavya is packing her things and tells Vanraj that she and Anirudh will be thrilled to go abroad. Vanraj says that I was angry with you, but that does not mean that I have left you. I should ask you once before doing all this.

Vanraj tells Kavya that Anupama is trying to get closer to him. I went to my family because I had seen my death. Kavya feels convinced about Vanraj. Vanraj says that the end of our love story will be like this, did not know. Kavya tells him to end all relationships with Anupama.