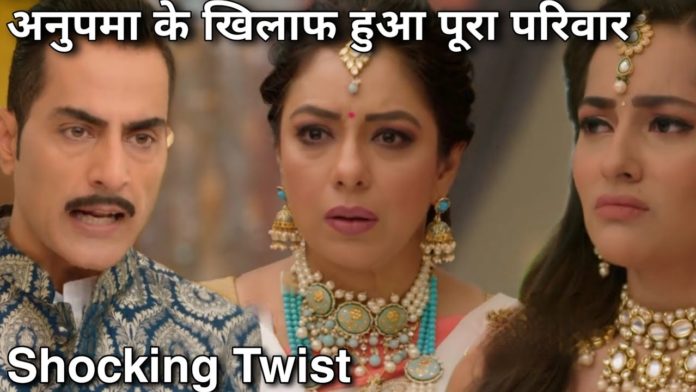 In the show ‘Anupama,’ there is a lot of uproar in the engagement of Samar and Nandini. The secret of Nandini comes in front of everyone, and there is a lot of ruckus on hearing it. Nandini can not become a mother. Knowing the truth, Baa and Vanraj break up the engagement. After which, Samar separates from his entire family and moves to Anupama. Samar Nandani decides that until the whole family joins their happiness. He will not marry.

The incident took place in the engagement of Samar-Nandini

Nandani tells Anupama that she cannot become a mother. After which, Vanraj scolds Anupama that she hid it the most. Anupama explains to the whole family that Nandni did not hide anything by knowing. The talk goes ahead, and Boy realizes that Nandni has grown in age since Samar. Bow then becomes angry, knowing this. There is a lot of debate between Vanraj, Samar, and Anupama. The boy throws off the engagement plate and says that Nandani cannot become a mother, so she cannot become the daughter-in-law of his house.

Vanraj warns Samar that he should run away and marry Nandni, but he will not step into her house after that. Anupama is shocked to hear this, and she says that Nandni and Samar will get engaged. In other words, Bau tells Anupama that she can no longer speak in the decisions of her house because all their relationship with her family has been broken.

Upon hearing this, Anupama is shocked and upset. Anupama is saddened by the family’s behavior and folds her hands, and asks Bau and Vanraj not to vent their anger on Nandni and Samar.